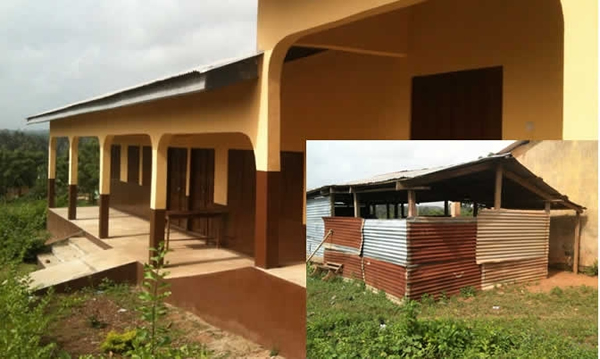 A newly constructed three-unit classroom block for the Akyem Apreade Railway Junior High School in the Eastern Region has been locked for the past year while pupils battle for classrooms to learn.

Although the new classroom block has since August 2014 been ready for occupation, the pupils have been denied access to the facility by the contractor, and have to use a rickety makeshift structure as alternative.

TV3 gathered government owes the contractor of the new classroom block for work done, hence the decision to lock the building. According to the Birim South District Assembly, the contractor self-financed the entire project, which started in April 2014 and ended in August the same year.

The situation has forced school authorities to merge two classes in the primary section – primary one and two- to make way for pupils in JHS two to occupy one of their classrooms.

Efforts at getting the contractor to hand over the keys to the block to the school authorities for use have failed as he is demanding for payment before the building is handed over.

The school’s Parent-Teacher Association has threatened to break the lockers of the block to allow the pupils access to the classrooms to learn, because its efforts to get the District Chief Executive of Birim South to intervene has not yielded results.

A source close to the Assembly said they were still in touch with the contractor and that they were waiting for funds from the Department of International Development in the next three months to pay off the contractor.

The school was established in 1976. It started with kindergarten and primary one to six without until in 2013 when management of the school in conjunction with the Ghana Education Service and the District Assembly established the JHS in an improvised structure to accommodate the JHS department from the 2014 academic year.

The first batch of JHS pupils upon promotion to JHS two, have been struggling for a place to use as classroom. This compelled authorities to combine primary one and two to make way for the JHS pupils. But authorities say the situation is hampering academic work.

Meanwhile a hole to be used as cesspit for the toilet has been left opened, posing danger to the kindergarten pupils whose classrooms are close to the open manholes.