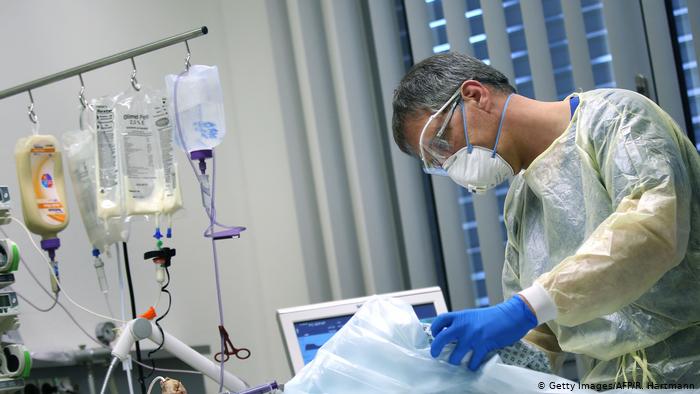 Within a few weeks, the number of ICU patients is expected to pass the record set in April, the head of the German Hospital Federation said. Medical experts also warned of exhausted staff and diminished care capacity.

German hospitals are set to see a record number of patients receiving intensive care due to the latest surge in new coronavirus infections, the German Hospital Federation head Gerald Gass said in an interview on Monday.

“In two to three weeks, we will exceed the highest number of intensive care patients seen in April, and we can no longer prevent that,” Gass told the mass-circulation Bild newspaper. “Anyone who will be admitted to the hospital in three weeks is already infected today. Unfortunately, that’s the realistic prognosis.”

Additionally, medical staff working in other areas are expected to be transferred to intensive care units, he said. “This is of course not ideal, but it can be justified in such an exceptional situation.”

Other medical professionals have echoed Gass’ sentiment, calling for stronger countermeasures to curb infections and ease the strain on hospitals.

“Very clearly, there is not much room in some federal states,” Uwe Janssens, the president of the German Association for Intensive Care and Emergency Medicine, told Bild am Sonntag.

“Berlin only has 14% of its intensive care beds available, and Bremen 17%. The situation in the spring was much less dramatic than what is in store for us now.”

Germany’s Commissioner for Nursing Care, Andreas Westerfellhaus, called on people to postpone any plans that could be put off, and warned of exhausted nursing staff.

“Many intensive care nurses are already working to the limit, and they have rightly warned of a deteriorating situation,” Westerfellhaus told Bild. If countermeasures aren’t taken now, Germany could see hospital conditions similar to those in Italy during the first wave, he added.

“Soon, many of the 1,900 hospitals in Germany could collapse,” said Hans.

Experts have also cited questions over the true number of available beds, as not all hospitals are equipped with enough staff to offer care despite having bed capacity. At the end of last week, more than 7,500 intensive care beds were still available.

However, “many hospitals register beds as available, which are free but cannot be used due to a lack of personnel,” Christian Karagiannidis, the speaker for the intensive care registry told Welt am Sonntag.

“We are lulling ourselves into a false sense of security when it comes to the number of free intensive care beds,” said Karagiannidis.

Karin Maag, the health policy spokeswoman of CDU/CSU parliamentary group also demanded more accurate figures on available beds. If a clinic reports a concrete number of available intensive care beds, this must also be supported by sufficient personnel, she said. “I want to be able to rely on the statements.”

Germany entered a monthlong partial lockdown on Monday, following record tallies in new infections. Under the new measures, bars, restaurants and gyms are closed while travel within the country is heavily restricted. The country has recorded over 552,000 cases and more than 10,500 deaths since the start of the pandemic.

DISCLAIMER: The Views, Comments, Opinions, Contributions and Statements made by Readers and Contributors on this platform do not necessarily represent the views or policy of Multimedia Group Limited.
Tags:
Coronavirus
German Hospital
ICU patients