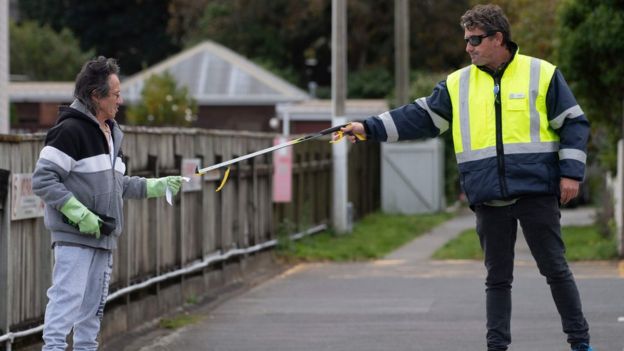 With new cases in single figures for several days – one on Sunday – Prime Minister Jacinda Ardern said the virus was “currently” eliminated.

But officials have warned against complacency, saying it does not mean a total end to new coronavirus cases.

The news came hours before New Zealand moved out of its toughest level of social restrictions.

From Tuesday, some non-essential business, healthcare and education activity will be able to resume.

Most people will still be required to remain at home at all times and avoid all social interactions.

“We are opening up the economy, but we’re not opening up people’s social lives,” Ms Ardern said at the daily government briefing.

New Zealand has reported fewer than 1,500 confirmed or probable cases of coronavirus and 19 deaths.

New Zealand’s Director-General of Health, Ashley Bloomfield, said the low number of new cases in recent days “does give us confidence that we have achieved our goal of elimination”.

He warned that “elimination” did not mean there would be no new cases “but it does mean we know where our cases are coming from”.

Ms Ardern said there was “no widespread undetected community transmission in New Zealand”, adding: “We have won that battle.”

But she said the country “must remain vigilant if we are to keep it that way”.

How did New Zealand respond to the virus?

The country brought in some of the toughest restrictions in the world on travel and activity early on in the pandemic, when it only had a few dozen cases.

It closed its borders, started enforcing quarantine of all arrivals in the country, brought in a stringent lockdown and mounted an extensive testing and contact tracing operation.

Beaches, waterfronts and playgrounds were shut on 26 March, as were offices and schools. Bars and restaurants were also closed, including for takeaway and delivery.

Ms Ardern said modelling indicated New Zealand could have had more than 1,000 cases a day if it had not brought in the lockdown so early.

She said the country could never know how bad it would have been but that “through our cumulative actions we have avoided the worst”.

New Zealand’s remote location and easily sealable borders played in its favour when the virus broke out, experts say.

But the government has also been praised for the clarity of its messaging throughout the crisis.

At midnight local time (12:00 GMT on Monday), New Zealand moved from Level Four lockdown to Level Three. That means most businesses will be able to reopen – including restaurants for takeaways – but not those involving face-to-face contact.

New Zealanders are being told to stick to their “bubble” – a small group of close friends or family – and to stay 2m (6ft) away from people.

In Australia, the rise in infections has also slowed considerably in recent weeks. There were just 16 new cases recorded on Sunday.

Much like in New Zealand, its government has been praised for its response to the crisis and opinion polls show that trust in the country’s leadership has risen.

Restrictions are easing in some areas, with some states planning to relax social distancing rules to permit larger outdoor gatherings this week.

In Queensland from Saturday, people will be free to go shopping for clothes, have a picnic in the park or go for a swim at the beach as long as it is within a 40-minute drive from home.

However, most Australians are still required to stay at home unless they have essential work, shopping or exercise reasons to go out.

More than a million Australians also downloaded a coronavirus contact tracing app within hours of it being released by the government.

Users of the app will be notified if they have had more than 15 minutes of close contact with another user who tests positive for Covid-19.

There are reports that Australia and New Zealand are considering opening up travel between them but no decision has been made.