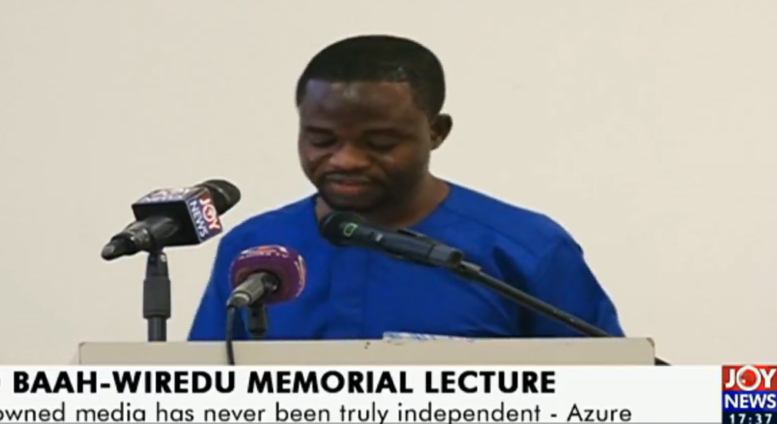 Freelance investigative journalist, Manasseh Azure Awuni has said that the performance of the media in recent times has dwindled, causing a decline in critical journalism.

Speaking at the 2020 Baah-Wiredu Memorial Lecture event held in Accra on October 29, he stated that the commitment of media houses to the fight against corruption has also waned, further describing the performance of Ghana’s media as being “below average”.

“In the last ten years, however, the number of media houses committed to the fight against corruption in Ghana has dwindled,” he said.

“If you ask me how the media has performed in the fight against corruption in the Fourth Republic, I will say it is below average. Out of 10, I will award 3 marks for the effort of the media. It is getting worse by the day and critical journalism is dying,” he stated.

According to him, state-owned firms in the media industry are unable to be objective about government-related issues, and are thus not able to critique the actions of the government.

The award-winning investigative journalist, however, applauded the works of private firms in holding government accountable despite their late entry to the media industry.

“The state-owned media have never been truly independent and have therefore lacked the ability to be critical of government.

“Private radio and television stations were late entrants to Ghana’s media industry. They came in the Fourth Republic but a few of them still contributed to the fight against corruption,” he added.

DISCLAIMER: The Views, Comments, Opinions, Contributions and Statements made by Readers and Contributors on this platform do not necessarily represent the views or policy of Multimedia Group Limited.
Tags:
Corruption
Manasseh Azure