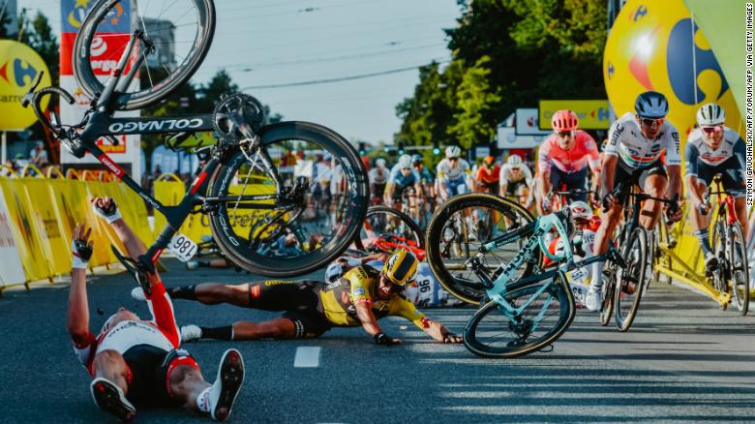 Dutch cyclist Dylan Groenewegen has been suspended for nine months following a horrific crash in the Tour of Poland earlier this year.

Groenewegen drifted into the path of fellow rider Fabio Jakobsen at the end of the first stage of the race in August, causing Jakobsen to collide with a barrier.

According to his Deceuninck-QuickStep team, Jakobsen — who was placed in a medically induced coma and underwent facial surgery after the crash — faces a “long and arduous” recovery.

“It was a crash where the severity of the consequences was unfathomable,” said Richard Plugge, director of Groenewegen’s Jumbo-Visma team.

“Now that the disciplinary case has been concluded, we can start looking forward again. We will do that together with Dylan.

“We are relieved that there is now perspective and clarity. We wish Fabio Jakobsen the same. The encouraging reports about his recovery do us good.”

Groenewegen’s suspension dates back to the Tour of Poland incident, meaning he will be clear to race again on May 7 next year.

“The crash … will forever be a black page in my career,” said the 27-year-old.

“During the sprint I deviated from my line. I am sorry, because I want to be a fair sprinter. The consequences were very unfortunate and serious.

“I am very aware of that and I hope this has been a wise lesson for every sprinter. I follow the news of Fabio’s recovery very closely. I can only hope that one day he will return completely.

“Closing the disciplinary matter creates clarity. That gives me the opportunity to look ahead again. I am happy about that, even though May 7 is still far away.

“I am happy with the support I get from Team Jumbo-Visma, my family and friends. Together we will work towards that day both mentally and physically.”

According to the UCI, cycling’s global governing body, Groenewegen has also agreed to take part in events to benefit the cycling community. Earlier this month, Jakobsen said he was hopeful he would soon be able to return to cycling.

“Four weeks after the reconstruction of my upper and lower jaw it was time for the stitches to come out,” he wrote on social media.

“The process of healing is going well.

“The transplanted bone has to grow strong and firm for the next four months now.

“In a couple of weeks my pelvic crest should be healed and strong like before again. From then I can slowly start training on the bike again!”