A tropical storm has swept away bridges and homes in eastern Zimbabwe, killing at least 24 people, officials say.

Cyclone Idai cut off power and communications in parts of Manicaland province on the border with Mozambique. Some 40 people are missing.

People fled from their homes to the slopes of mountain and were waiting to be rescued, but strong winds have hampered helicopter flights.

In Mozambique, where Idai made landfall on Thursday, at least 19 people died.

Flooding across the rest of the country had already killed nearly 70 people before the storm's arrival.

Zimbabwe's information ministry said the town of Chimanimani had been cut from the rest of Manicaland province. The country's national army was leading the rescue efforts, it added. 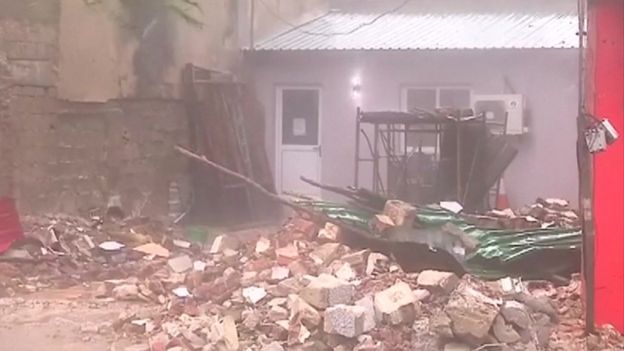 Houses were destroyed by the tropical storm in Mozambique

The death toll was expected to rise as authorities continued to assess the situation.

Jacob Mafume, a spokesman for the opposition Movement for Democratic Change, said a "serious humanitarian crisis [was] unfolding" in the east of the country.

The cyclone hit Mozambique with winds of up to 177km/h (106 mph). It cut off more than 500,000 residents in the port city of Beira, one the country's largest cities. Roads were flooded and the airport was shut down.

Mozambique has been struck by severe cyclones in the past, including Eline in 2000, when 350 people died and 650,000 were displaced across the wider region.

Beira has often seen the worst of the storms and has worked to limit the effects of rising waters brought about by climate change through a series of infrastructure projects.