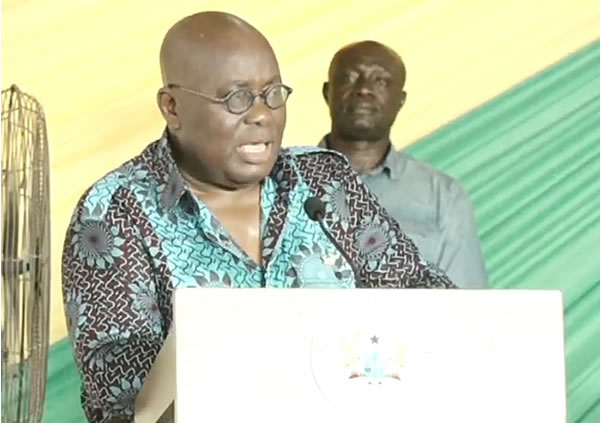 President Akufo-Addo has urged leaders of Manso Amenfi, Amenfi West, Amenfi East, Amenfi Central and Aowin districts to protect the peaceful coexistence amongst them despite calls for separation from the existing administation.

He said that the creation of a new region must not jeopardise the unity enjoyed over the years amongst ethnic groups in the Western Region.

“We want to continue the unity amongst all the different groups in the region. The separation shouldn’t mean we should sever relations with others. The unity of our region and the country at large are paramount. What we are doing is to improve the governance of the country… make it more cohesive," Akufo-Addo said.

There has been a strong petition to the Commission of Enquiry on the Creation of New Regions to carve a Western North Region out of the Western Region.

A series of consultations and public hearings has been held with traditional authorities and people in the Western Region to collate views that either support or object to the split.

The president, however, expressed optimism with the splitting of the Western Region into two. According to him, feedback taken from the various consultations and arguments by petitioners for the creation of a new region are very convincing.

He said the Justice Brobbey-led Commission of Enquiry on Creation of Regions is about bringing their work to an end.

"By far, what I’ve learnt on the media is indicative that the recommendation would be that. A referendum should be held.”

However, he reiterated that the creation of the new region must be demand driven. He noted his government has initiated the constitutional processes in realizing the dreams of the people.

He added that until all the constitutional provisions are exhausted, there’s little he could do to enforce the creation of the new regions.

“I have done all that is possible within my power to initiate the process. It is left with you to affirm the action by voting during the referendum. If it is true that you want the Western North Region, you will get it. No two ways about that.” Akufo-Addo emphasized.