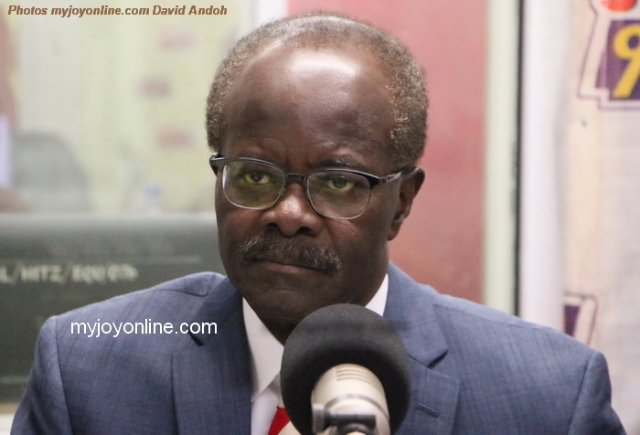 The disqualified Presidential Candidate of the Progressive People’s Party (PPP) has expressed his disappointment in the failure of the Electoral Commission (EC) to disqualify the National Democratic Congress (NDC) and New Patriotic Party (NPP) in the upcoming polls.

Dr Papa Kwesi Nduom said an even application of the Political Parties Act 574 would have seen the nominations of the two dominating political parties rejected as happened to him and 11 others.

Speaking on the Joy FM’s Super Morning Show Thursday, the entrepreneur said he is convinced President John Mahama of the governing NDC and Nana Addo Dankwa Akufo-Addo of the NPP did not submit their asset declaration forms as directed by the EC.

He said he complied with the directive as he had always done when it comes to directives of the Commission, urging the EC to crack the whip on the defaulters.

The Part II of the Political Parties Act 574 section 13 states:

13. (1) Every political party shall, within ninety days after the issue to it of a final certificate of registration under section 11 or such longer period as the Commission may allow, submit to the Commission a written declaration giving details of all its assets and expenditure including contributions or donation in cash or in kind made to the initial assets of the political party.

(2) A declaration submitted to the Commission under subsection (1) shall state the sources of funds and other assets of the political party.

(3) The declaration shall also contain such other particulars as the Commission may in writing direct.

(5) The Commission shall, within thirty days after receipt of the declaration required under subsection (1), cause it to be published in the Gazette.

(6) Without prejudice to any other penalty prescribed by this Act or any other enactment, where a political party

(a) Refuses or neglects to comply with this section; or

(b) Submits a declaration which is false in any material particular, the Commission may cancel the registration of that political party.

The former flagbearer of the Convention People's Party (CPP) in the 2008 election has been unhappy after the EC disqualified him and 11 other presidential candidates for improperly filling their nomination forms on Monday.

EC Chair, Charlotte Osei told the media that she was unable to accept the nominations of Dr Nduom because he did not get the require number of subscribers as demanded by Regulation 7 (2) (b) of the Constitutional Instrument (C.I.94).

She added that "The subscriber was found to be on the Voter's Register in one district thereby disqualifying his second subscription and reducing the total number of subscribers to below the minimum required by the Law."

"The same subscriber (Richard Aseda ('Asida') endorsed the form with different signatures in both portions of the nomination form. This raises questions as to the legitimacy of one or both signatures."

Unsatisfied with the EC's reason, the PPP leader entreated the Commission to grant him a five-minute hearing for to explain his position. Although, the EC granted him hearing as he requested detail of the discussion has not been made public.

Dr Nduom has challenged the Commission to apply the rules and regulations governing elections in the country if it wants to do the right thing.

But reacting to the claim by the entrepreneur on the Joy FM's Top Story programme Thursday, NDC deputy General Secretary, Koku Anyidoho charged him to go to court if he believes the NDC and NPP have flouted the law.

“If he thinks that the EC is in breach of some section of the stipulated law let him go to court and invoke the provision he thinks President Mahama has disobeyed," he said.

As far as all the directives of the Commission are concerned, Mr Anyidoho said the NDC complied with every one of them, denying claims that President Mahama did not submit his asset declaration form.

NPP Director of Communications, Nana Akomea also believes the best way for Dr Nduom to unearth the truth about his asset declaration claim would be for him to go to court.

"We don’t have any quarrel with him and we are hoping that this matters of disagreement with the EC would be worked on. We wish him well in his dealings with the EC," he said.