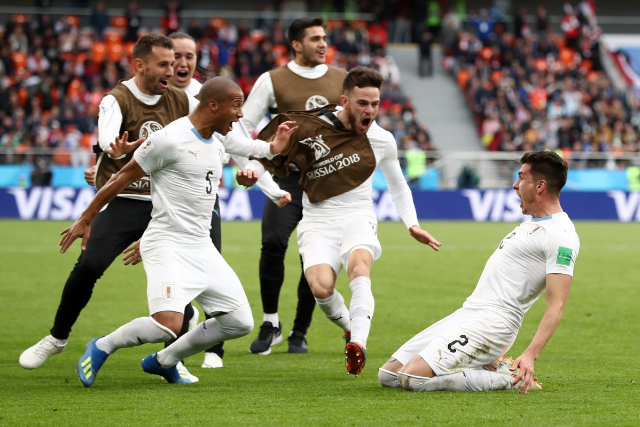 Uruguay snatched a late winner as they began their World Cup campaign with a dramatic victory over Egypt, who without star player Mohamed Salah.

Jose Gimenez headed powerfully into the net in the 90th minute as he met Carlos Sanchez's free-kick to give the South Americans a winning start in Russia.

THE PHAROAHS HAVE FORGOTTEN HOW TO WIN A GAME

It has been 630 minutes since Egypt won a game. The last game they won was against Congo in the qualifiers when they won 2-1. The loss against Uruguay now leaves Egypt in a very precarious situation as they have to win their remaining games to be able to qualify. This means that Hector Cuper will need to find a way around this winless streak if the Pharaohs want to qualify to the next round in their first appearance at global showpiece since 1990.

SUAREZ IS STILL ON A VACATION

Suarez provided 5 goals and 2 assists during the qualification stages. However, Suarez looked like a stranger against Egypt. He seems to have lost his connection with Cavani. His match was summarised into misplaced passes, poor control and missed chances. The nature of the chances he missed was worrying because he was clean on goal on three occasions. Suarez will need to find his shooting boots if Uruguay have any hope of going far in the tournament.

SHENAWY MAY HAVE JUST CLAIMED THE NUMBER ONE SPOT

A few eyebrows were raised when Shenawi was picked ahead of veteran goalkeeper El Hadary. El Hadary was poised to make history by becoming the oldest player ever to play at a World Cup. He is currently 45 and he still has a chance to break this record as Egypt still have at least two games left. Shenawi will stand in El Haddary’s way as he had a very commanding performance today. A point-blank save to deny Suarez and an athletic save to deny Cavani in the second half wasn’t enough to keep a clean sheet but it was an inspiring performance by the Zamalek SC shot-stopper. He was also voted as Man of the Match.

If you had told Sam Morsy that he would be playing in the World Cup two years ago I am sure he would have laughed in disbelief. Well fast forward two years and he has made his debut in a World Cup with Egypt. Morsy has had an incredible year contributing immensely to Wigan’s promotion from league one. The story of Sam Morsy is indeed a fairy tale because he was recommended to the Egyptian FA by a journalist. Would it be too much of a fairy tale if Sam Morsy ended up as a World champion?

Oscar Tabarez admitted that he would be giving the next generation of Uruguayan players a chance. He started with Bentacur, Vecino, Nandez and Arrascaeta – all of which are 25 years. Uruguay looked flat and dull until the introduction of C. Sanchez and C. Rodriguez. Both wingers replaced Arrascaeta and Nandez. The game changed completely after the introduction of these veteran wingers. Perhaps, Oscar Tabarez may need to hold on to his next generation experiment and stick to his old formula.