Egypt's parliament has approved constitutional amendments that would allow President Abdul Fattah al-Sisi to stay in power until 2030.

Mr Sisi is due to stand down in 2022, when his second four-year term ends.

But the amendments, which must be put to a referendum within 30 days, would lengthen his current term to six years and allow him to stand for one more.

They would also give Mr Sisi more power over the judiciary and further enshrine the military's role in politics.

Since then, he has overseen what human rights groups say is an unprecedented crackdown on dissent that has led to the detention of tens of thousands of people.

Mr Sisi was first elected president in 2014 and was re-elected last year after winning 97% of the vote. He faced no serious competition because several potential rivals dropped out or were arrested.

Parliament is also dominated by supporters of Mr Sisi and it has been criticised by the opposition as being a rubber stamp for the president. 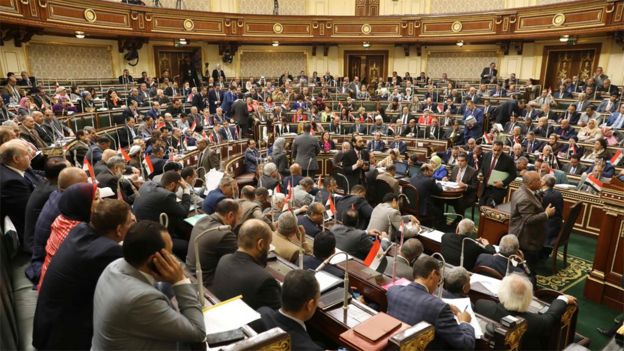 One MP who campaigned for the constitutional amendments, Mohammed Abu Hamed, told AFP news agency that Mr Sisi was a president who "took important political, economic and security measures" and who had to be allowed to "continue with his reforms" in the wake of the unrest in neighbouring Libya and Sudan.

But Khaled Dawoud, of the liberal al-Dustour party, dismissed the argument as "absurd" and told the BBC that the changes represented a "power-grab" by Mr Sisi.

The internet monitor NetBlocks said Egyptian authorities had partly or fully blocked 34,000 websites in an attempt to restrict access to a campaign website that had reportedly collected 250,000 signatures against the amendments.

How could the president stay in power until 2030?

Article 140 of Egypt's current constitution, which was approved in a referendum in 2014, currently says that the president serves four-year terms and may only be re-elected once.

Under the changes approved by MPs on Tuesday, presidential terms would become six years.

A transitional arrangement outlined in article 241 would extend Mr Sisi's current term by two years and allow him to stand for one additional six-year term in 2024.

The president would also be permitted to appoint one or more vice-presidents. The post was removed following the adoption of the 2012 constitution.

What about the role of the military?

The military's economic and civilian activities have already expanded since Mr Sisi became president. It is in charge of major infrastructure projects, and generals occupy key positions throughout the government.

Article 200 would be changed to say that, as well as protecting the country and preserving its security, the duty of the military is to "preserve the constitution and democracy, maintain the basic pillars of the state and its civilian nature, and uphold the gains of the people, and the rights and freedoms of individuals".

The amendment to article 234 would meanwhile enshrine the role of the Supreme Council of the Armed Forces in approving the minister of defence's appointment. The article had been set to expire at the end of Mr Sisi's second term.

How would the judiciary be affected?

The amendments to articles 185, 189 and 193 would enshrine an executive body headed by Egypt's president to oversee the judiciary and allow the president to appoint the heads of key courts, including the Court of Cassation and the Supreme Constitutional Court, as well as the public prosecutor.

Amnesty International has said this would undermine judicial independence.

The amendment to article 190 would largely remove the authority of State Council judges to revise legislation before it becomes law.

Article 204 would be changed to grant wider jurisdiction for military courts. They would be able to try civilians not only for attacks against military installations, factories, equipment, zones, borders and personnel, but also any building that is under the protection of the military.

Thousands of civilians have been tried in military courts since 2011.

Would parliament change too?

New articles would re-establish an upper house, which was abolished in 2014.

The president would appoint one-third of the 180 members of the new chamber, which would be known as the Senate. The rest would be directly elected.

The number of seats in the lower house, the House of Representatives, would also be reduced from 596 to 450, with at least 25% reserved for women.