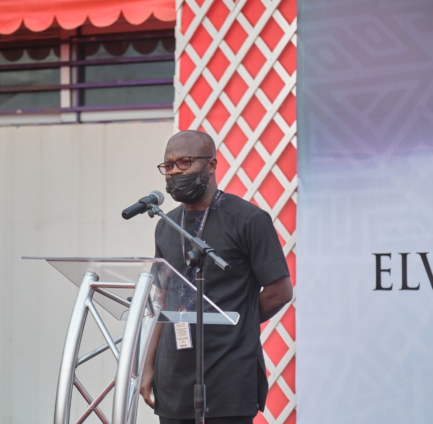 His tribute was at the remembrance service held at the forecourt of Joy FM on Wednesday where colleagues, family and friends convened to share fond memories of the seasoned media practitioner.

In a heartfelt and emotional tribute, Kwaku Owusu Peprah described Elvis Kwashie as an affable man who provided wisdom and guidance to his subordinates.

Mr. Peprah stated that, “Elvis visited heaven last week. He made a decision to stay there, never to return to the realms of Mortals again.”

“Elvis I know you can hear and see us gathered today. Well that decision is the purpose of this meeting. Cynthia, and your lovely children are traumatised in grief. KT your boss and Godfather has been pierced with a sharp spear. Edem Knight Tay and Emily are shattered. Prince Tsegah, Fiifi Koomson, Odelia, Gary Al Smith and Kwaku Fresh all the members of the team are at the crossroads, wishing the thought of your departure away, hoping to wake up from this nightmare. But those words you said to most of us were indeed your last.,” he said sorrowfully.

“Elvis, your picture is on the wall today. Incidentally where your head is, is your office. The place we came for wisdom and guidance. Where you told us we would miss you. You took a bow when the applause was loudest, owing to your own words, ‘maybe it’s time to quit,” the JoyNews Channel Manager said with tearful eyes.

Prominent personalities such as the CEO of the Multimedia Group, Kwasi Twum, Information Minister Kojo Oppong Nkrumah, President of the Ghana Journalists Association (GJA) Roland Affail Monney, among others, were present at the remembrance service.

DISCLAIMER: The Views, Comments, Opinions, Contributions and Statements made by Readers and Contributors on this platform do not necessarily represent the views or policy of Multimedia Group Limited.
Tags:
Elvis Koku Kwashie
Kwaku Owusu Peprah
Memorial service for Elvis Kwashie