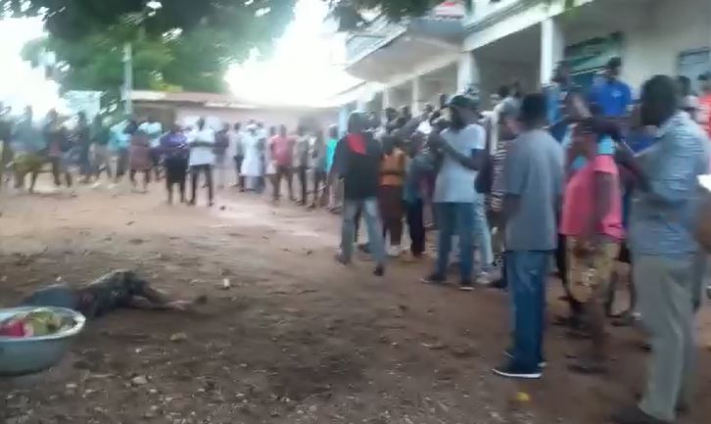 The family of the deceased SHS student who was allegedly struck by lightning on Monday has disclosed their reason for leaving his mortal remains in the open for many hours after the incident happened.

The 17-year-old, Emmanuel Dorli, who was a student of the Sokode Senior High School, allegedly died in the regional capital, Ho, after he was struck by lightning during a downpour in the late hours of Monday,

He was said to be in the company of two female colleagues who were also affected by the lightning.

The two females were rushed to the hospital and are currently on admission at the Ho Teaching Hospital, however, the boy’s mortal remains still laid in the open.

A man who identified himself as the grandfather of the boy said the family had to wait on a response from a delegation which was sent to consult a deity at Nogokpo on what to do before any action can be taken.

“When things happen like this, we have to find out what happened. So we have sent delegates to the South where we believe they know something about this thunder. So we are waiting for their arrival before we know what to do,” he told 3news.

Grandfather of boy struck by lightning speaks on why the body was left for hours unattended to, awaiting a delegation from Nogokpo. #3FMSunrise pic.twitter.com/ewpY4oxZGn

According to eyewitnesses, Emmanuel was hawking coconut by the roadside as he normally does after school hours and on weekends, when he was allegedly struck by the lightning.

They say it sounded so loud they believed it was spiritual.

“These things are spiritual and it happens only when someone is behind it and the victim might have had issues with someone who decided to go the spiritual way,” one resident said.

DISCLAIMER: The Views, Comments, Opinions, Contributions and Statements made by Readers and Contributors on this platform do not necessarily represent the views or policy of Multimedia Group Limited.
Tags:
Emmanuel Dorli
Nogokpo
Sokode SHS