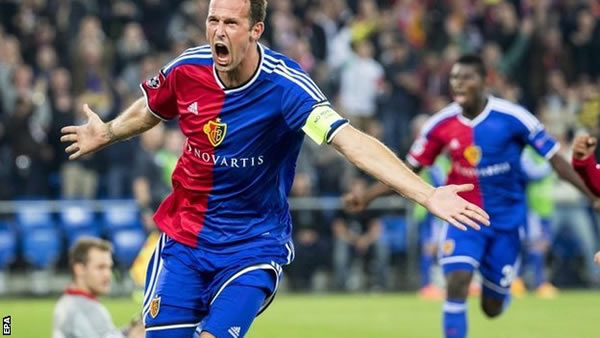 Liverpool's hopes of making the Champions League knockout stages were dented as they succumbed to a 1-0 Group B defeat at Basel.

Raheem Sterling and Mario Balotelli both had goals ruled out for offside, but Liverpool rarely threatened.

Instead the visitors' defensive problems were exposed as Martin Skrtel headed towards his own goal and Marco Streller swept home the loose ball.

Steven Gerrard came close to a late leveller, but his free-kick was saved.

While Liverpool roused themselves to apply some concerted pressure in the final five minutes, it was not enough to merit an equaliser that would have denied the hosts victory.

Instead manager Brendan Rodgers returns to Merseyside without a point and with more concerns over the disjointed attack and dysfunctional defence that have undermined the start of their Premier League campaign.

Basel themselves looked vulnerable when they were beaten 5-1 by Real Madrid in their Group B opener, and they were cut open inside five minutes by the Reds.

However Sterling strayed carelessly offside before turning in Lazar Markovic's cross, and Liverpool struggled to create a chance of similar quality for the rest of the match.

Instead full-backs Jose Enrique, preferred at left-back to Alberto Moreno, and Javi Manquillo were frequently exposed as their team were penned back.

Geoffroy Serey Die, exploiting space on Enrique's flank, came closest to scoring in the first half, slamming a shot into Simon Mignolet's shins.

While Liverpool looked vulnerable out wide in the first half, it was their deficiencies in the centre of defence that were exposed by the Swiss side's goal.

Martin Skrtel, more concerned with grappling with his man, inadvertently headed the ball against Dejan Lovren and, while Mignolet got down sharply to prevent an own goal, the goalkeeper succeeded only in palming the ball into Streller's path for a simple finish.

Without the injured Daniel Sturridge and the departed Luis Suarez, Liverpool were stripped of the interplay and invention of last season and struggled for a response.

Only Mario Balotelli's long-range free-kick, blocked by goalkeeper Tomas Vaclík's shoulder, and Sterling's clumsy mis-control when clean through gave the home crowd cause for concern.

With back-to-back meetings against holders Real Madrid to follow in Group B, Liverpool will need a vast improvement to progress to the knockout stages.

And they will certainly need to play better to ensure a return to the competition next season.