Week 20 of the First Capital Plus Premier League will see matches played at the various stadia across the country on Sunday.

The sense of competition is very high with so many teams tied on the same number of points. There are three teams on 30 points, two on 29 and a further three on 25 points.

Ahead of the games, Obuasi’s AshGold sit on top with 37 points and B.A. United are bottom with just 15 points.

Inter Allies vs Wa All Stars

Wa All Stars will try to hold onto their impressive winning streak in the second half when they host Inter Allies. Inter Allies have not won any of the last seven games and they will want to reverse.

Inter Allies only secured their fourth consecutive draw last Sunday while the Wa Park saw host beat visiting Great Olympics 2-0. All Stars are planning a coup at the top of the table according to Coach Jimmy Cobblah. In an interview with SportsCrusader, the coach said: “I don’t want to promise fans anything but I know that it is going to be better and better. By next week I will have Michael Mensah back in the team whiles Joseph Adjei and Kofi Yeboah just joined the team from the Satellites. Our national players and key players are not part of the team, so I tell you it is going to be better than this.”

Bar this fixture, some of the rest show teams very close to each other on the log.

In Kumasi, Bechem United will visit Asante Kotoko in what is expected to be a big deal especially for the Porcupines. Many will be looking forward to what David Duncan and his boys can pull off to compensate for their uninspiring showing in the second round.

Kotoko have conceded 10 goals and have responded with 6 in the second round. Bechem United come into the game on the back of a 3-1 triumph over New Edubiase last Sunday.

The only source of joy for the Garden city club has been their good form in the FA Cup – they won in midweek – and will aim to replicate it this weekend to fully restore confidence in their distressed fans.

Great Olympics will look to bounce back after suffering a 2-0 crushing defeat to Wa All Stars. They'll be hosts of the fixture to a resurgent Liberty Professionals who came from a goal down to inflict a 3-1 defeat on defending champions, Asante Kotoko.

However, Managing Director of Olympics believes things are not too dire and that the club will be fine. Oluboi Commodore said: “We are counting on points accumulated and not on the position we are now. If you look at the league table now, 3 points can lift you up two or three places and when you fall too the same applies. We are looking to win the next three matches which would be Liberty in Accra, Inter Allies in Tema and Bechem United in Accra. We are clearly waiting for those matches.”

Hearts of Lions find themselves in a messy situation following a decision by the FA’s Executive committee to close their home grounds due to crowd violence.

Their game against Berekum Chelsea on Sunday will therefore be played at a neutral venue which is yet to be decided. Berekum Chelsea will enter the game on the back of a 2-1 win over Aduana Stars while Lions come in after a 4-1 defeat to Medeama.

Sekondi will be the place to be for the match as the league leaders come into the game after a 4-1 win over B. A United at home while Hasaacas will be hoping to recover from a loss of the same score to WAFA.

The Miners sit seven points clear at the summit of the league but saw their cup ambitions dented following defeat to Kotoko. Victory will signal an intent of Ashgold’s title charge as the league prepares to enter its home stretch.

Aduana Stars play host to WAFA at the Agyeman Badu Park on Sunday. Both WAFA and Aduana sit comfortable at 3rd and 6th respectively but will be hoping to move higher as a win for either side will be very instrumental in how well they will place at the end of the season. '

WAFA come into the game confident after crushing Hasaacas 4-1 at home whereas Aduana Stars lost 2-1 to Chelsea and will be hoping to make up for this.

B. A. United v Hearts of Oak

Hearts of Oak will travel to B. A. United in a bid to improve their second round run which has resulted in just one win. The Sunyani club will be hoping that home support will help them recover from their disastrous showing in the season which has seen them languishing at the bottom of the league with 15 points after 19 games. 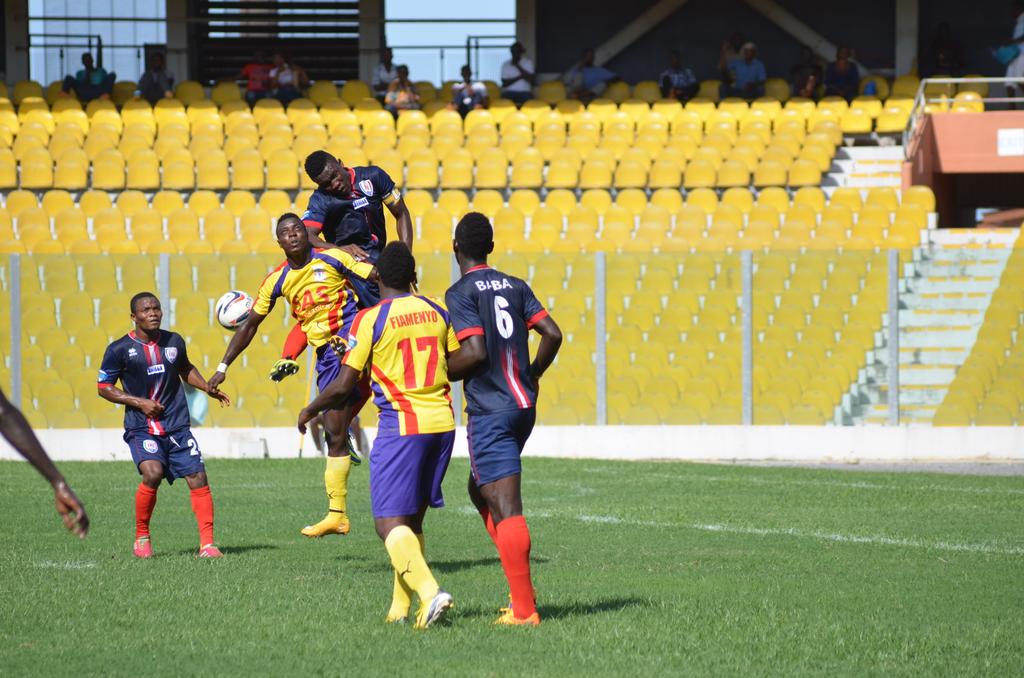 Hearts defender Owusu Bempah has said the club will bounce back after the loss to Wa All Stars. He said;

“I can say that we the players are not happy at the current situation. Currently we are doing our best but the best is still not enough. If we win the remaining games of the season, we can change the table and that is what we are working very hard to do.”

Commentary of key games from around the country will be on Sports Arena from 3pm, Sunday on Joy 99.7FM. There'll be live social media updates on our Twitter: @Joy997FM. Hashtag is #joysports.