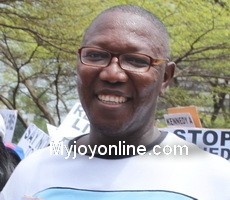 The Forum for Governance and Justice, (FGJ) an NGO has challenged Nana Akufo Addo, flag bearer of the New Patriotic Party (NPP) to clarify his alleged involvement in a bribery scandal in 2005.

“We have a 15th July 2010 judgment by an Accra High Court commercial Division, which dismissed a case that Uniex Ghana limited had brought before it against Rockshell International Limited because the plaintiff’s case had been based on refusal of the defendant to pay a 50% bribe as precondition for paying a judgment debt”.

Dr Clement Apaak, Convener of the Forum at a press conference in Accra on Tuesday, said the bribe was alleged to have been paid to Nana Addo, the then Minister of Foreign Affairs, Kwadwo Mpiani and the late Kwadwo Baah Wiredu.

He explained that it was necessary for Nana Addo and other former government officials cited in the case to publicly challenge the assertion and institute legal action against the plaintiff to prove their innocence on the issue.

“Why has Nana Akoffo Addo not challenged the assertion that he and others sought 50% as bribe, made by the plaintiff under oath?”

Dr Apaak said it would be in the interest of Nana Addo to come up with an explanation for his silence on the case to the public since failure to do so might mean he does not have the moral right to talk on corruption.

He said government officials should always be held accountable adding that the Forum’s move was for Nana Addo to clear the air on the issue for Ghanaians to decide whether he is the right person to lead them.

He said the FGJ intends to make a formal petition to Economic and Organized Crime Office to take a deeper look into the case.