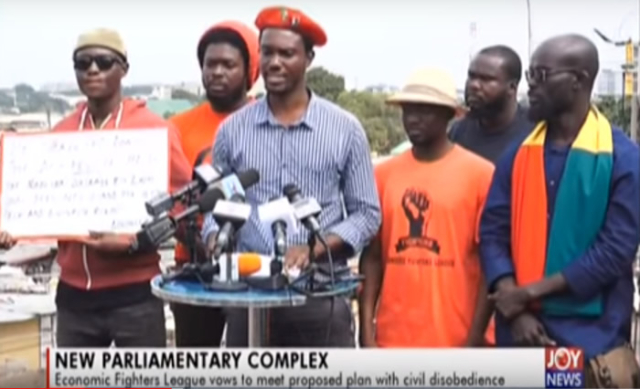 The Speaker of Parliament, in connivance with some of the MPs, seeks to waste $200m borrowed money to build a new needless parliament. Note that this is in the face of pertinent social, economic and security challenges.

There is a rising state of insecurity and curtailment of press freedom; kidnappings and armed robbery. What has happened to the three beautiful Ghanaian ladies who were kidnapped over a year ago in Takoradi? We were here when Canadian girls allegedly kidnapped were rescued in few hours. How many Ghanaians have been murdered in their homes so far? What has been done about these killings? If a Member of Parliament got killed in his house and almost five years down the line nothing conclusive has been done how do you feel as a Ghanaian?

Economically, we are steadily getting impoverished. Streetism is an ever-rising menace. Poor implementation of housing policy, having manifested in scarce accommodation, keeps shooting up rents in this country. It is just life-threatening to rent a room in the capital. Sustainable jobs are non-existent so young bright Ghanaians after school are wasting away in despair. There is no workable plan to lift the young people of this country out of despair.

Fellow Ghanaians, walk into our markets and observe the conditions in them; our mothers, wives, sisters and daughters compete with filth daily to do business. There is the need to modernise where our food is sold and the indigenous economy is ran from. There is more work to be done on our roads to open up many areas of our country to material progress. How are the parents of the six KG pupils who were sent to their early graves when their dilapidated school block collapsed on them? The State does not value the Ghanaian life.This is not to remind some of you of your pains; but, let me ask, how many Ghanaians have died as a result of our poor health system?

We have become victims of a dysfunctional State, which some people pretend to be building. Hospitals have no beds, no oxygen tanks, no needles, no adequate staff, no power etc etc. 70-year old Anthony Opoku-Acheampong met his death when about seven State hospitals refused him admission for lack of bed space. How many babies have died at birth, some together with their mothers, because of a dysfunctional health system? Who else do we want to see dead before realising it is time to wake up?

We cannot pretend to be unperturbed by such misleadership. Ghana has been misled by political choreographers who have formed themselves into two drama troupes – NDC and NPP- and messing us all up. We are justifiably angry. The young people of this country are in despair and we will not sit down to be killed by despair so we are up to dismantle this caricature of a fake democracy feeding on us.

Beloved citizens, most Ghanaians are aware of the relevant issues I have raised and it is instructive to note that there is a general disapproval from the masses against the frivolous Chamber project. For this reason, we were in parliament on Friday 5th July to register our displeasure since all avenues for civil interrogation of the system were closed.

The immediate consequences captured on tape are there for us all to see. It is the official relaunch of CIVIL DISOBEDIENCE, a non-violent interrogation of the vampire system and its architects. It is a summons we have issued to Ghanaian youth to rise for our country.

It has been flying around that parliament has given up on the insensitive idea of building a new needless parliament. We do not trust them. We demand official statements from The Speaker and Majority leader of Parliament as well as the Government that such project has been aborted.

Fellow Ghanaians, while I was being manhandled by the police, I made a statement that young people of this country should rise up. We have been lied to that there is democracy in Ghana.

What we have is a FAKE DEMOCRACY created and sustained by a SAKAWA Constitution. There is no democracy in Ghana. What we have is a performance of democracy where the representatives represent their own interests. The people have no power whatsoever except once every four years when they form long queues to vote for people who don’t care about their welfare.

Let us not lose sight of the class struggle we are dealing with. The privileged few are hellbent on securing their comfort. The oppressed people on the other hand are seeking to survive.

Look at their arguments for building the chamber; that it will help the speaker to see MPs well. If the Speaker can’t see well, it is glasses he needs not a new chamber. The most ridiculous one is that it will prevent the two sides – majority and minority – from physical fights. They also complain about space. This existing chamber is almost always empty. The Speaker has had several occasions to complain about absenteeism of MPs. Odekro has published reports that show concrete data of how MPs absent themselves from the House.

Last year, we took their data and submitted a petition to the Speaker to declare 54 seats of those MPs who had violated article 97 of the Constitution. He didn’t even have the courtesy to acknowledge receipt or reply our petition. So when I hear people say that our approach was wrong and that we should have written a petition, I ask them this, ‘must we continue to write long letters and petitions which receive no responses?

Saturday’s peaceful demonstration being organised by Rasheeda Adams and other gallant patriots has our full support. I will be there live. All Fighters will be there. We need every Ghanaian who is able to turn up on Saturday for the two million Ghanaians march. Nobody should stay home. We the people must do everything within our power to make sure that this new chamber is not built. We will not sit down and allow $200 million dollars to be spent on a completely needless project like this while money is needed to do several important things. Teachers recruited for the double track SHS system have not been paid for nine months. That money can pay them.

Young people in NABCO earn only GHC 700 a month. For those living in cities where cost of living is high, this barely takes them home. Even in Parliament, data by Odekro show that a lot of young people working there as Research Assistants earn between just GHC 300 and GHC 500 per month. How are they expected to survive in Accra with such meagre salaries? That money can be used to raise their pay. We can count numerous educational and health infrastructural needs that $200 million can be used for. Why spend it on a frivolous new chamber?

Now to my fellow young people; our country has been hijacked and held hostage by people whose only role is to protect their own interests. When they go, it is we who will have to contend with the consequences of their actions and inactions. It is our duty to take our destiny into our own hands and say ENOUGH IS ENOUGH. We must rededicate ourselves to bringing down this rotten system that works for only a few and erecting one that will work for all. The fight against the new parliamentary chamber is only a small part of this system. We must analyse our problems from their roots. We need to take our country back from the claws of the vampires and set the agenda for our future prosperity and that of our successor generation.

When we have our country, no one will have to pay huge sums of money to access education. Nor indeed be educated based on crap curricula that reinforce the psychological subjugation of the Black man through topics like “advantages of slavery and colonialism”.

When we have our country back, Ghana will once again be the leading light for the unification of Africa and Africans all over the world to guarantee for all time the awaiting prosperity of black people.

When we have our country back, we shall be able to finally determine and ensure that the collective wealth of the country should be used for the necessities of all and not the luxuries of a few. Senseless things like four-year ex-gratias will be forever done away with.

But this entails hard work. Kwame Nkrumah said, “Freedom is not something that one people can bestow on another as a gift. Thy claim it as their own and none can keep it from them”. Political freedom was not gained on a silver platter. Economic freedom will not be different.

And now, let us take a moment to salute all the gallant young Fighters out there who are vigorously challenging the status quo. Special respect to Rasheeda Adams, Bilkis Nuhu, Kuukuwa Manful, Namata Serumaga-Musisi and all Queen Nzingas out there leading the fight for a sane society. We also thank lawyers Francis Xavier-Sosu and Samson Lardi Anyenini for their assistance.

We are grateful to our friends in the media who have stood with us to tell the story of the common man and woman seeking a better country.

Thank you very much. May God bless us all.