Gambia's new President, Adama Barrow, is to return to the country on Thursday to assume power – days after his predecessor left, aides say.

Mr Barrow, who has been staying in neighbouring Senegal, won elections in December.

However a handover was stalled when Gambia's president of 22 years, Yahya Jammeh, refused to step aside.

He left for exile in Equatorial Guinea at the weekend after ultimatums from regional leaders.

Mr Barrow was sworn in as president at the Gambian embassy in Senegal a week ago, but a public inauguration on home soil is planned soon, aides say.

Several thousand West African soldiers remain in The Gambia amid reports that rogue pro-Jammeh elements are embedded in the country's security forces.

The troops had threatened to drive Mr Jammeh from office if he did not agree to go.

President Barrow is to be accompanied to Banjul by the UN envoy for West Africa, Mohamed ibn Chambas. He has said the UN will help uphold security in The Gambia. 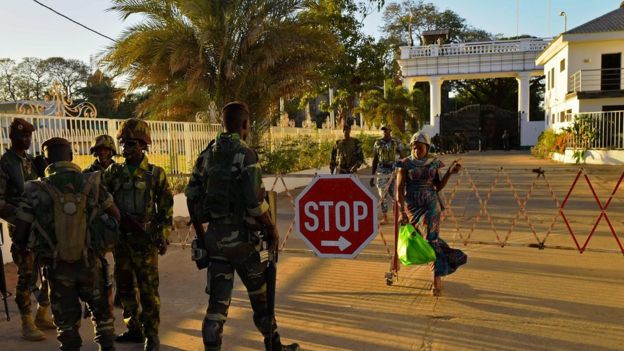 Ecowas forces have been securing the Gambian capital Banjul