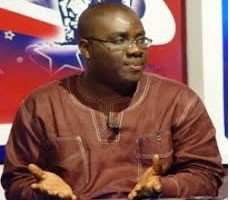 An aspiring National Youth Organizer of the opposition New Patriotic Party (NPP), Samuel Awuku has expressed frustration about what he says is the deteriorating socio-economic conditions in the country.

He said despite government’s measures to stabilise the economy, the problem has grown from bad to worst.

Describing Ghana as a "sinking ship in toubled waters," the former Deputy Communications Director of the NPP exclaimed “I’m frustrated at the current economic situation; businessmen are choking to death and government seem to be oblivious of this fact”

He was reacting to measures introduced by the Bank of Ghana to halt the depreciation of the cedi against major currencies.

The Central Bank among other things announced that cash withdrawals over the counter shall only be permitted for travel purposes outside Ghana and shall not exceed $10,000.00 or its equivalent in convertible foreign currency, per person.

It also directed that for travel purposes, withdrawals out of foreign currency accounts over the counter will be paid in cedis at the existing exchange rate.

But speaking on Asempa FM’s Ekosii Sen programme Friday, Sammy Awuku questioned the feasibility of the BoG measures to shore up the cedi.

According to him, businessmen and women require more that $10,000.00 to travel outside the country therefore the directive will only promote trade in the black market.

The aspiring National Youth Organizer likened Ghana to a psychiatric patient because “ there is no sense of direction; we have lost our sense of reasoning when it comes to issues of economy”.

The strident critic of the Mahama-led administration described as ‘sickening’ government’s continuous use of propaganda when Ghana is ranked among the league of poor performing countries in the world.

“I knew President Mahama will be a failure but not the disaster we are witnessing now” he stated.