Ghana Rugby Club Championship kicks off with a difference 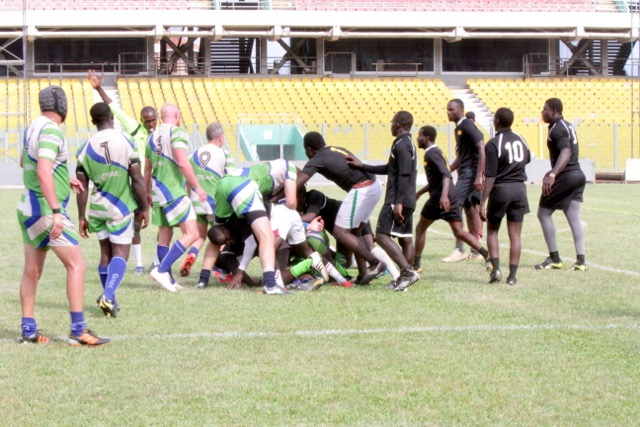 The 2015/16 Ghana Rugby Club Championship (GRCC) kicked off at the Accra Sports Stadium on Saturday 21 November 2015 with a series of exciting new events as prelude to the main league matches.

According to the President of the Ghana Rugby Football Union (GRFU), Mr. Herbert Mensah who spearheaded the changed format of GRCC match days, the changes were brought in not only to present spectators with a more exciting experience on the day but to make a real and valuable contribution towards the development of the game of rugby in Ghana.

The previews were followed by three GRCC matches between Accra Sharks RFC and Dansoman Hurricanes RFC at 11am, Griffons RFC and Idas Sporting Club at 1pm and finally Titans Sporting Club against UCC Spartans at 3pm. Griffons and Spartans are Cape Coast based teams while the other four hail from Accra.

The kids training sessions were conducted by members of the Accra Rugby Club and other members of the expatriate community as part of their commitment to make a greater contribution towards rugby development in Ghana.

According to Brice Crewsent, a coach and kids trainer, it is a plus for Ghana Rugby to see women and kids playing at a young age which shows that Ghana Rugby has a brighter future.

“I am very happy to be here today at the Accra Sports Stadium to unleash lots of new players with many of the kids being expatriates and I think is good for Ghana Rugby. My mission is to help raise the image of Rugby to much higher levels using my 36 years of experience in Rugby,” he said.

Prior to the commencement of the GRCC matches Mr. Mensah also presented match officials, referees and linesmen, with a brand new set of jerseys.

In the main GRCC matches Dansoman Hurricanes beat Accra Sharks convincingly with 56 points to 10 while Idas triumphed over Griffons from Cape Coach with a final score of 31 to 5.

The last match of the day was a runaway affair when Titans beat the Cape Coast based UCC Spartans 96 to 0.

Cosmos Buffaloes RFC enjoyed a “bye” or off day on the first day of the GRCC.”‹

Mr. Mensah said that it has become clear that the quality of training in the CentWest Zone of the GRFU is lacking that of the teams in Greater Accra.

“With recent developments in CentWest I am confident that the quality gap of Rugby by the teams of the two Regional Associations will in the foreseeable future be closed significantly,” he said.

“Tertiary educational institutions in countries of Top Tier Rugby unions are a very important part of the development framework for Rugby and an important source of players for both junior and senior national teams,” he said.

Mr. Mensah said there are many other developments in the pipeline that include the establishment of the Ghana Female Rugby Association as well as the expansion of the youth development at schools under the banner of World Rugby’s “Get Into Rugby” programme.

“Till now programmes for Rugby development at schools level have not been very successful due to lack of resources, structure and continuity. The GRFU has reviewed these programmes and has put a new structure in place with assistance from the Ghana Rugby Union Players Association (GRUPA) and we are confident that this will boost youth Rugby development,” Mr. Mensah said.

Mr. Mensah noted that all organisations have the challenge to execute projects and programmes within the constraints of the 3Ms namely Men or people, Machinery of facilities and equipment and Money or funding. 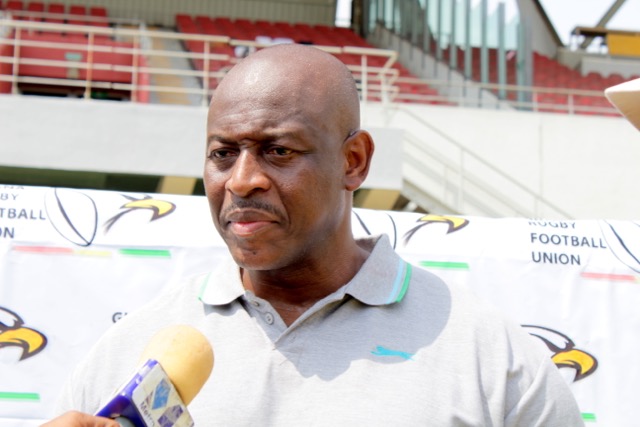 Mr. Herbert Mensah, President of the GRFU, in talks with the media about the plans and challenges of Ghana Rugby. 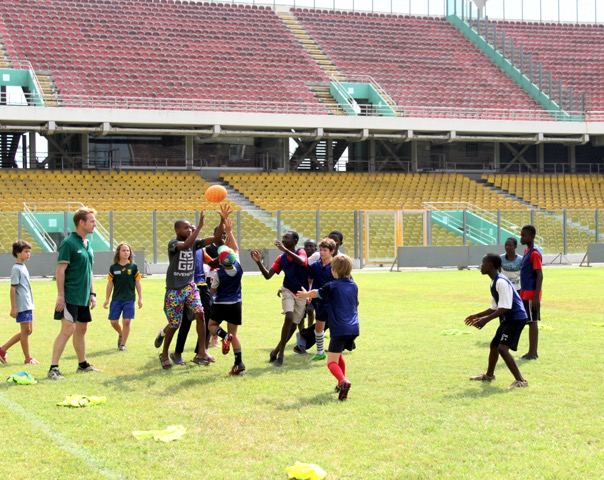 The first day of the 2015/16 Ghana Rugby Football Union started with kids training in the basic skills of Rugby. 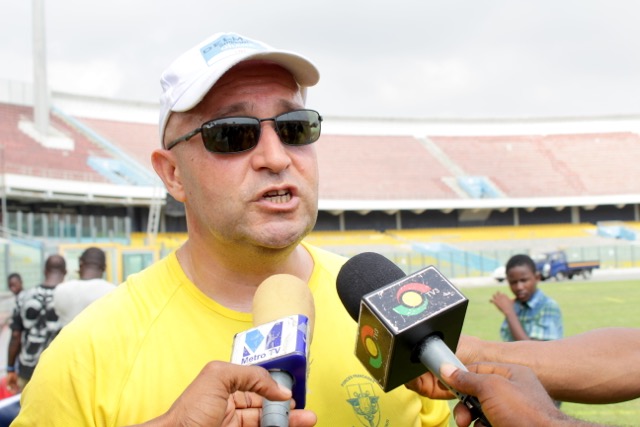 Mr. Brice Crewsent, a coach and kids trainer, said that he can only see a bright future for Ghana Rugby given the latest developments. 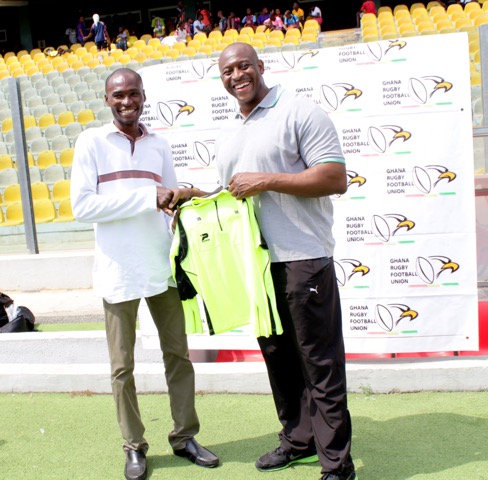 Mr. Herbert Mensah, President of the GRFU, presented the match officials with a brand new set of jerseys. 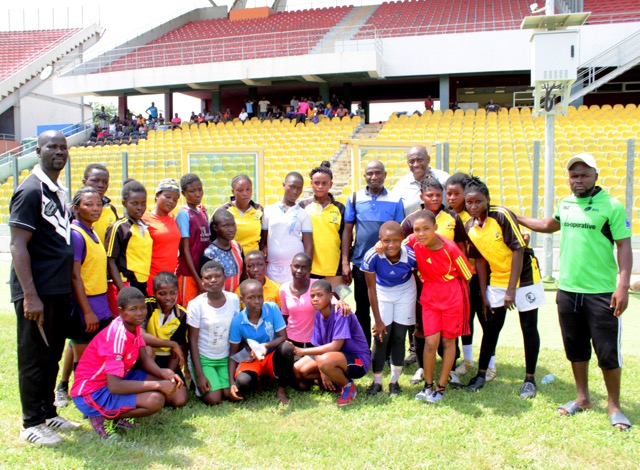 As part of the preview events to the first day of the 2015/16 Ghana Rugby Club Championship (GRCC) a ladies team played a 7s match. 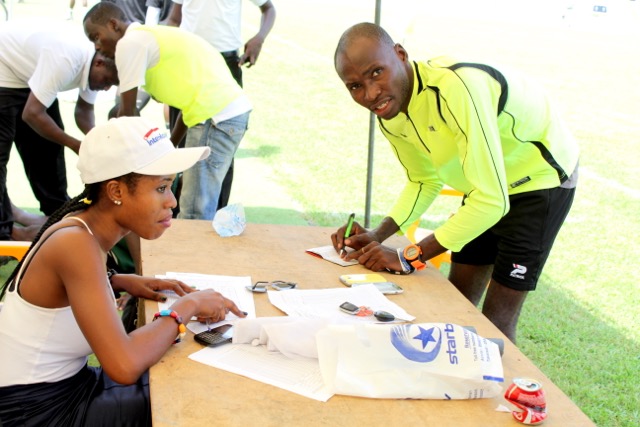 Ghana Rugby welcomes the selfless contributions by volunteers such as those who help with keeping records at matches. 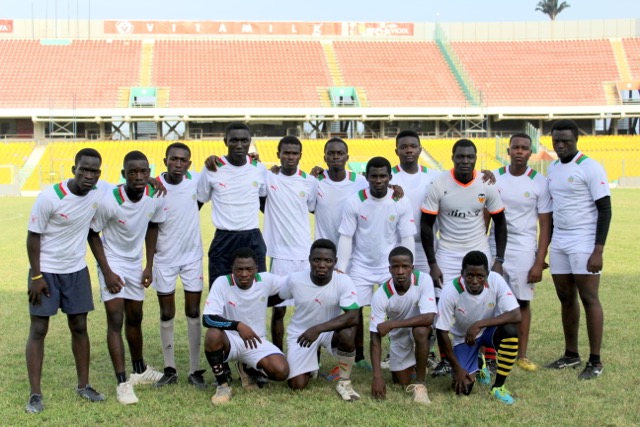 One of the preview events included a men’s 7s match between two 2nd division teams.