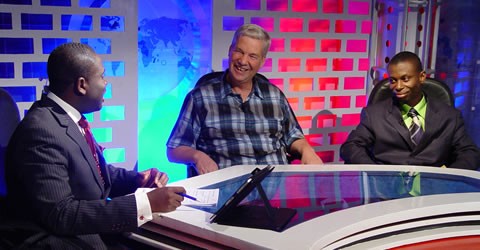 Contrary to reports that Ghana has eradicated the Guinea Worm disease, the National Field Coordinator of the Guinea Worm Eradication Program, David Agyemang has explained that the country has in actual fact just interrupted the transmission of the disease.

Speaking on Multi TV’s current affairs show, pm: EXPRESS, Mr. Agyemang said “we are sure that we don’t have any place at the moment where people can go and get the disease.”

He explained that the World Health Organization [WHO] is the only organization that can declare a country free of guinea worm infections. This he said will be done by the WHO after a three-year surveillance in the affected country.

Late last month, Vice President John Mahama at a ceremony in Tamale announced that Ghana had completed 14 consecutive months of reporting no indigenous cases and indicating that the cycle of guinea worm has been broken.

Guinea worm is a parasitic infection caused by drinking stagnant water contaminated by water fleas or copepods containing the Dracunculus larvae. The eggs live in abdominal tissues where they hatch and mate.

Ghana reportedly had 180,000 cases in 1989 which later reduced to a few hundred by 2005 and increased again by 1000 new cases in January 2007. Prior to the 2005 decline though, Ghana was ranked second to Sudan on the global chart of guinea worm endemic countries.

According to Mr. Agyemang, the country’s ability to interrupt the spread of the disease is due to several factors, key amongst them been the direct funding of the eradication efforts by government and other donor partners like the Carter Center and micro planning.

The Country Representative for the Carter Center, Jim Niquette who was also on the show urged the country to be on the lookout for new cases despite the interruption. This he said was necessary because conditions for escalating the disease are high pointing out that “for instance in Central Gonja, 60 percent of the people lack water”.

Mr. Niquette cited Chad, as an example of a country which reported 12 new cases last year after breaking transmission for almost 10 years.

“Now they are trying to determine whether they were re-infected or they never really broke transmission” he added.

According to him, Togo, Burkina Faso and Cote d’Ivoire have all broken transmission but just as Ghana exported the disease to Niger last year, it can be exported from Mali to Ghana.

Pending the pre-certification from the WHO, David Agyemang said Ghana’s Guinea worm eradication program will now focus on education and documentation to prepare the grounds for the declaration of the country as guinea worm free.