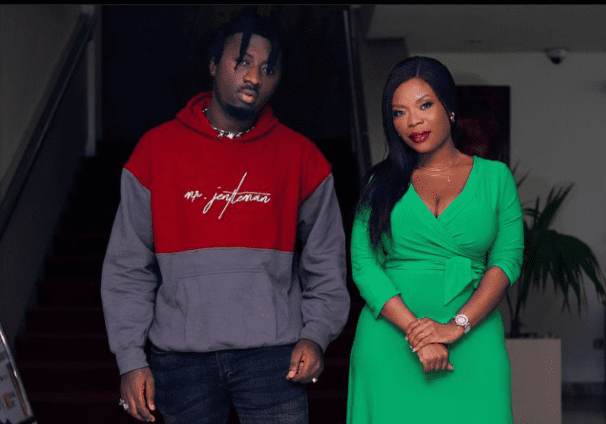 Rapper Amerado says rumours that he was in a romantic relationship with media personality Delay was one of his highlights for 2021.

According to him, sharing in the headlines withDeloris Frimpong Manso was an interesting time for him.

Earlier this month, the TV presenter and media personality denied speculations that she is in a relationship with the rapper.

However, this did not deter Twitter users from speculating further.

Speaking in an interview with JoyEntertainment’s Becky, Amerado neither confirmed nor denied the rumour but asked Ghanaians to keep guessing.

“The fact that I had a monster hit, that is one thing I was looking out for this year and the fact that people think I am dating Delay, it gives me some form of confidence, some form of huge relevance. It is show business, and I call something ‘destructive sampling’.”

“People should just keep waiting and guessing because it is not what they are thinking, but I do not want to talk about being specific on the fact that Delay is a girlfriend or a friend. We all know she is trying to help a brand, trying to support my craft as well, so it is what it is,” he explained.

“Whatever I say will not change the perception of the people. So they should keep guessing, and they should pray for me that I would be that kind of rapper that will hold after the legends are gone.”

Amerado further said he is grateful to his fans for their support this year.

“This year has been amazing, and I thank the fans so much for holding it down for me. I was telling my manager this has been my best year. I cannot be thankful enough to the fans and God as well.”

“When I sit down and access myself, dropping a couple of songs, freestyles, ‘Monster Hit’ with Black Sheriff, going on Tim Westwood TV, having beef, and still staying relevant, and having the number one EP in the country, it sums up the kind of work I did, and I am very appreciative to them,” he added.

DISCLAIMER: The Views, Comments, Opinions, Contributions and Statements made by Readers and Contributors on this platform do not necessarily represent the views or policy of Multimedia Group Limited.
Tags:
Amerado
Delay