GHPL: 5 things we learned from matchday 4 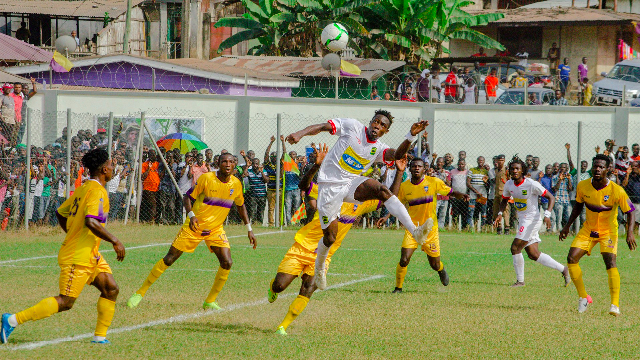 Asante Kotoko succumbed to their second successive defeat of the season as Hearts of Oak ended their Sogakope curse.

Aduana Stars lost for the first time while AshantiGold dropped points in Accra.

Berekum Chelsea continued their fine start to the season but there is an interesting pattern developing at Liberty Professionals.

Here are five things we learned from an astonishing weekend in the top-flight;

Hearts of Oak finally get something at Sogakope

In the past 5 years, Hearts of Oak have lost all their trips to Sogakope to face WAFA.

Last season, Hearts of Oak were humiliated losing 5-0 away to the Academy boys.

Nii Odoom knew he had a tough task ahead but he would be proud of his side’s performance.

The Phobians created the better chances and had more of the ball as they denied WAFA from creating clear cut chances from open play.

Before Wednesday, Hearts had conceded 11 goals in three visits to Sogakope. Despite getting just a draw, this result should give Nii Odom’s side the much-needed confidence going forward.

Legon Cities were looking to improve their attendance in their second home game of the season as they welcome AshGold.

In the first game against Kotoko, the stadium was a quarter full as fans were thrilled with a performance from dancehall artiste Shatta Wale.

This time, the artiste invited was Kwesi Arthur and despite making tickets free for ladies, less than 5,000 fans were at the Accra Sports Stadium.

Perhaps, the Royals may have to resort to improving performances on the pitch to attract more fans.

Goran’s men are without a win in their opening four games and would need to improve offensively if they’re to stand any chance of survival.

Asante Kotoko not as formidable as expected

Prior to the start of the season, most pundits and fans tipped Asante Kotoko to win the league by a landslide.

Many expected the Porcupine Warriors to build on their NC Special Cup triumph and their participation in the qualification stages for the CAF Champions League and Confederations Cup.

However, that hasn’t been the case so far as Kotoko have been far from impressive losing two consecutive games against Berekum Chelsea and Medeama respectively.

Against Medeama, the Kumasi-based club once again fell prey to a penalty making three consecutive mid-week meetings that the Mauves and Yellow have taken the lead through the penalty spot.

When Maxwell Konadu won the league in the 2011/12 season with Asante Kotoko, he lost just three games.

This season, the Porcupine Warriors have already lost two games after matchday 4.

Konadu’s second coming is not going as planned and the pressure might be piling up sooner rather than later.

If defeating Hearts of Oak at the Accra Sports stadium was not enough to make them title contenders, then getting successive wins against Asante Kotoko and Dreams FC could be the game-changer.

Berekum Chelsea have racked up impressive numbers so far this season winning three games and drawing one.

Their most impressive achievement this season is the fact that they are yet to concede a goal.

The acquisition of Ahmed Adams and Danlad Ibrahim has helped the Blues shutout all their opponents making it six hours without a breach to their defence.

Fuseini has also been impressive at the back partnering Adams, the former grabbing the winner against Dreams FC.

The big question remains as to how long Berekum Chelsea can keep this good form.

Liberty Professionals are unbeaten this season; drawing against Legon Cities, Berekum Chelsea and Medeama whilst registering their first win against Ebusua Dwarfs on matchday 4.

A pattern that’s being developed for the Dansoman-based club is the knack for late comebacks.

In their first game against Legon Cities, the Scientific Soccer Lads came from two goals down to secure a draw.

Both goals were scored in the last 12 with Ampadu grabbing the equalizer in the 89th minute.

There was a similar turn of events at the Cape Coast stadium as Liberty came from a goal down to win against Ebusua Dwarfs.

Once again Liberty scored both goals in the last 17 minutes of the match with Mensah getting the winner in the 90th minute.