GHPL: King Faisal are playing good football. But why aren’t they winning? 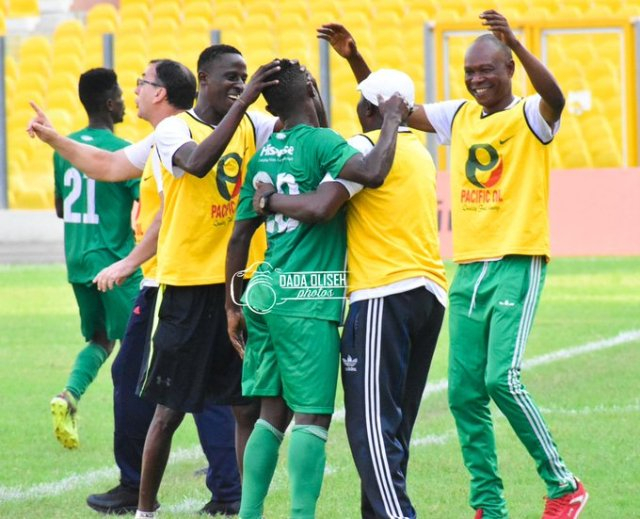 When King Faisal got relegated in 2014, they went down with their heads held up high knowing that if permutations had been slightly different on the final matchday, they could have finished in the top half of the table.

Nine matchdays into the new season and the feeling is that of nostalgia. King Faisal currently sit bottom of the league with just four points out of a possible 27.

To make matters worse, the Insha Allah boys are the only side without a win in the league, an indication that they may be on a downward tangent with no one else in sight.

However, numbers do not always tell the full story and this has been the case this season for Alhaji Grunsah’s team.

The situation of King Faisal is a rather strange paradox; the Kumasi-based club can be as fearless as a lion yet as naive a sloth.

So how can one team demonstrate such two extremes in just nine games?

Out of all the 18 teams this season, King Faisal are the joint-second highest-scoring team in the league. Currently averaging 1.3 goals per game,  they been expressive in attack scoring 12 goals in total.

Anytime they attack, they look like scoring with Anthony Commey’s men only failing to score in one game so far this season (1-0 defeat to AshantiGold).

Goalscorers of King Faisal this season

Ibrahim Osman has been the standout player for King Faisal contributing five of the 12 goals scored so far.

The Insha Allah boys showed their knack for going forward by scoring two goals despite being a man down.

They scored three goals but the number of points picked up on the day was 0.

The 12 goals scored by King Faisal could have even been more had they been more clinical. Hence, suggesting that they possess ideas when it comes to breaking down defences and creating chances.

Against WAFA, King Faisal needed a last-minute penalty by Mohammed Mustapha to snatch a point. Yet, the result could have been very different had they taken their early chances.

Head coach Commey was happy with the draw but believed his side should have taken all three points.

”We came to win this game with determination, especially when we started this game we should have put the game to an end there with about two goals to come in the second half but it didn’t go well for us.”

Though the attacking numbers of King Faisal suggest they should be higher in the league table, they are still winless in nine games in the Ghana Premier League, their longest such streak since a run of 10 games without a win in 2009.

King Faisal have shipped in 20 goals in the league this season, the most by any side. Rendering their achievement of scoring 12 goals meaningless as Commey’s men currently have the worst goal difference of -8.

Zero clean sheets so far spells trouble for King Faisal who look favourites for the drop after just nine games.

King Faisal have the worst defensive record this season

In the 2013/2014 season, King Faisal were relegated after conceding 28 goals in 30 games. This season, they have conceded 20 in just nine games, just eight goals away from their season tally six years ago.

The signs are not encouraging for Commey considering how leaky his team’s defence has been.

King Faisal have conceded first in seven of the nine games they have played so far and have only recovered two points from losing positions this season.

At times, it has been schoolboy defending from the Kumasi-based club looking at the nature of some of the goals they have conceded this season.

Olympics, who were the lowest scoring side before meeting King Faisal managed to score four goals on the day – half of their season tally as at that point.

Commey has had a goalkeeping headache this season already alternating between four keepers in just nine games. The factors have been suspensions, injuries and mainly poor form.

So far, Alexander Donfeh, Mustapha Bampoe, Kaisan Yuisu and Moro Yusif have been rotating in between the sticks for King Faisal.

In a defensive setup, the goalkeeper can be referred to as the shield because he is the last line of defence.

With King Faisal’s shield being so fragile and inconsistent, their defensive frailties come as no surprise.

The keepers are not able to inspire confidence which would rub off the defence. As a result, the defenders have been far from their best.

As a defensive unit, there has a lack of concentration and coordination for King Faisal. Players do not know who to mark and often do not win their individual duels.

King Faisal at the moment is a tale of two stories; one desirable, the other, not so desirable.  The most important factor in football is time and King Faisal have that on their side.

There are still 25 games left to be played and 75 points to be won. As time wears on, there will be a lot of movement on the league table.

With the transfer window currently closed, Commey will need to settle on a stable defensive line to allow familiarity.

A defensive unit will only understand each other the more they play together.

On the players part, they will need to be as passionate about defending as much as they are about attacking.

Each individual will need to fight for the badge and be a leader on the pitch.

With four of King Faisal’s next six opponents in the bottom half of the table, this could be a chance for Commey’s men to build some momentum in terms of results.

Maybe, just maybe, a win is all it may take to spark a revolution that will see King Faisal will revive. Insha Allah!

King Faisal have already suffered two defeats in their last four home games in the league (L2) – more than their previous 21 (L1).