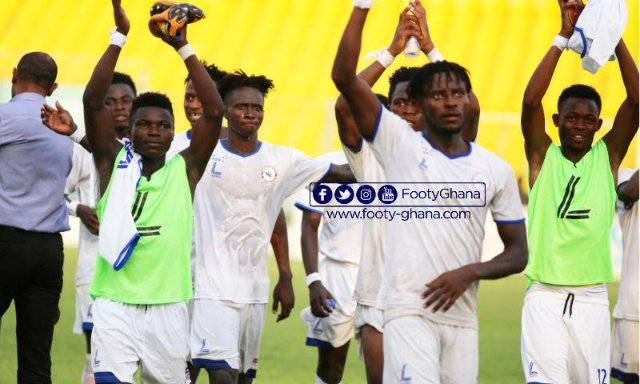 The last decade, Berekum Chelsea were one of the four clubs to break the duopoly of Hearts of Oak and Asante Kotoko in the Ghana Premier League. They were blessed to have co-owner Mr Emmanuel Kyeremeh whose bottomless pocket, earned them their first-ever league title and subsequently CAF Champions League football to the city of Berekum.

The assembled squad were on a good pay structure-salaries and bonuses were pegged high-, there was intrinsic motivation to punch above and they stepped on the pitch like gladiators. They won six major trophies in four years.

But that did not last and things took a nose-dive when Kyeremeh decided to quit football and relocated to Canada. Everything collapsed and co-owner Nana Kwame Nketiah had the arduous task of reassembling another militia. It needed time and sacrifice since he was going to do that on a shoe-string budget.

For the 2019/20 Ghana Premier League season, Berekum Chelsea have been a standout and everything is beginning to fall in its rightful place. After five rounds of matches, consistent displays and some kaleidoscopic football have seen them jump to the summit of the table.

The stats are eye-catching; The first team to win their first three away matches (against giants Hearts of oak, Asante Kotoko and AshantiGold), one of two sides to remain unbeaten in five matches. Berekum Chelsea’s electric start did not happen by chance, but some amount of remedial work has been put in by management.

The club revised their pre-season plans and decided to spend some time outside their base in the Berekum. Youth coach Randolf Armah took charge and ensured the conditioning of the players was different this time. The menu for pre-season friendlies too had to change. Chelsea strategically played against Division One League sides in the Bono and Ahafo Regions which toughened them.

”We have realized that some of the best teams in the Division One League are in this region and they have really tested our boys,” the club’s head of administration Francis Adjei Yeboah said.

These included two defeats to Tano Bofoakwa (1-0) and Young Apostles (3-2) at the Sunyani Coronation; drew 0-0 with Nsoatrema.

They travelled to Accra to play 0-0 with New Edubiase and 1-1 with Inter Allies.

Berekum Chelsea have one of the young and inexperienced squads in the Ghana Premier League. There is still belief in the club’s transfer policy of signing relatively unknown youngsters and give them the platform to strut their stuff.

Check some of their off-season dealings:

Already, they had the core of the team build around Jonas Attuquaye, Solomon Oblitey, captain Brimah Mohammed, Zakaria Fuseini and Stephen Amankona. They have been able to attract seasoned former players like Ahmed Adams, Jordan Opoku and Richard Kissi Boateng.

The appointment of Congolese-Belgian Alain Landuet as head coach has been described as a masterstroke. His selection was quite rigorous. The former AS Kaloum coach came out tops of the candidates interviewed for the job via Skype. He won the club’s board over with his detailed tactical plans in a PowerPoint presentation. He promised to play according to the strength of the players at his disposal after reviewing some of the matches on tape.

Landuet’s 4-2-3-1 which is difficult for the average Ghanaian player requires strength and speed, but that seems to fit the young and exuberant Chelsea players. Assistant coach Joseph Asare Bediako admitted after the 0-0 draw at home with Liberty Professionals that the system requires a lot of stamina and the boys are responding positively.

Berekum Chelsea thrives on family values and that is one thing which has lubricated their wheels for successive seasons. Owner Nana Kwame rallies all players together and has been candid and artless. As an employer, he acted the Godfather role very well too. It’s been shoulder-to-the-wheel approach at the club and players are ready to pull the chestnuts from the blazing fire. No discontentment.