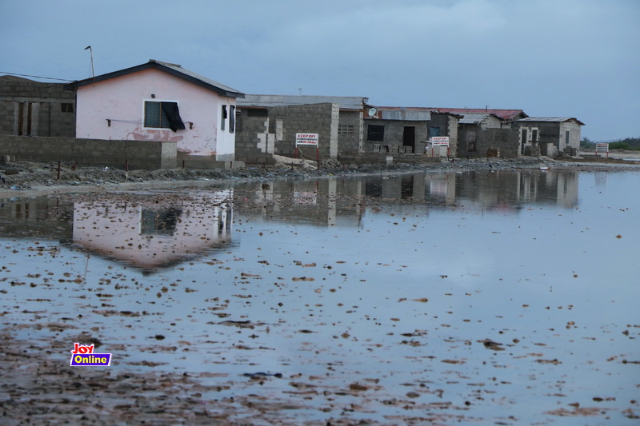 Residents of two communities along the coast of Ablekuma Sub-Metropolitan District of the Greater region, continue to live in danger despite government’s defence wall intervention against further tidal waves.

Government in November 2015, promised to construct a five-kilometre sea defence wall to protect Glefe and Wiaboman, the two communities from flood-related calamities.

The densely populated fishing communities, situated between the sea and a lagoon, have in the last couple of the years been hit by calamities such as tidal waves, floods and environmental sanitation challenges.

These calamities are as a result of the man-made lagoon downstream by Panbros Salt Industries which they use to produce salts.

The project, which was expected to complete within months, is still not completed while Sidalco Engineering, the contractor working on the project is not on site.

Some houses at the bank of the lagoon

To resign their fate to destiny, the only option for them is to choose to live between a rock and a hard place because any slight rainfall can flood the communities.

The once small and beautiful coastal communities popularly noted for their serene beach line, now bear scars too appalling for human comfort, the effect of environmental degradation imposed by hurriedly constructed structures to accommodate the teeming mass of new residents arriving by the minute, literally.

In the absence of rains-causing-floods, residents must contend with the ever-present danger posed by either the lagoon or the rising sea with strong tidal waves between which the community is wedged.

A resident parks his car on a partially flooded compound

An earthquake is a possible threat as the Greater Accra region has been hit by three earth tremors this year.

To worsen matters, heaps of sand at Kokrobite have caused the Densu River, which originally enters the sea at Aplaku in Kokrobite, to divert its course from about five kilometres at Wiaboman.

This has widened the confluence while stretching to join the water in the Panbros fields, a development which makes residents unsafe in terms of any possible rising sea level.

This is where Densu River and  sea meet now

The glaring dangerous signs are the strong waves and rapidly developing sea erosion claiming land which poses more danger to the communities.

Densu River finding its way into the sea around the community means the volume of water from Densu during the rainy season could wash the community away, especially, where climate change-related disasters are difficult to predict.

In an interview with a fisherman, Ebenezer Mensah, he said fishermen from Kokrobite have to berth at Wiaboman which makes it difficult for them.

Though the place is longer for new buildings, a section of residents is building on Pambros company’s land close to the salt ponds made along the lagoon, despite the warning signs placed at various points.

Indiscriminate dumping of refuse and open defecation are still common on Krokobite, Wiaboman and Glefe beaches.

Children of Wiaboman play in front of their home

A deep hole being created  around the place by the sea