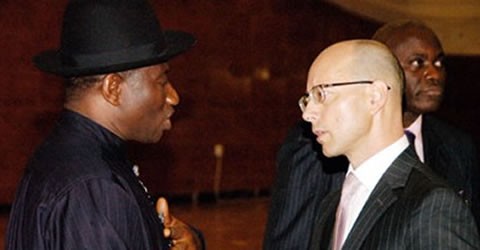 President Goodluck Jonathan Tuesday apologised to the international community over disruptions in social life in the country for a week over the strike called by Labour over removal of fuel subsidy and assured that such would not repeat itself.

He also told them that democracy and democratic governance has come to stay and was being deepened, adding that the gains of popular mandate was that governments which come to power through the popular will of the people were not easily toppled while those who steal mandates or impose themselves were easily shoved aside.

He assured at an annual cocktail party held at the Banquet Hall of the Presidential Villa, Abuja that adjustment in pump price of petroleum products in the country would no longer be done in a way that it will cause pain to Nigerians who gave him the popular mandate on which he rode to power.

The President thanked them for rallying round the country in its trying times especially when there were bomb attacks by Boko Haram, adding that the subsidy removal protest has made his administration stronger and vowed to fight with other governments across the globe to ensure that the world was a free place for all no matter the part of the world they come from.

“Let me again thank you for your various role and assure you that as we move into the new year even though we started the year with some kind of protest, I regret the inconveniences some of you passed through because of the government attempt to look at the way we look at our oil industry by adjusting the pump price and the issue of deregulating the oil sector that led to demonstrations by labour and civil societies.

“I believed some of you suffered some inconvenience because you couldn’t go out for a week, you couldn’t visit people you would have loved to visit,” he said.

“I can assure you that it has even made us stronger and indeed better. We promise that we will continue to grow from strength to strength and the incident of last week, we have put them behind us and we are moving forward. We will not experience that kind of situation again.

“We will make sure we work hard to ensure we will not experience that again. We appreciation your understanding. I know some people must have come to you and send all kinds of messages to your various governments. I believe that you know that the position of the government is the best for the people.

“Government will ensure that while adjusting the pump price, we will not do it in a way that will bring suffering to the people. We know we were misunderstood, prices couldn’t have gone up that way but that is a human society and is a human factor,” he assured.

Jonathan said he had promised the people of free and fair elections and further assured that subsequent election in the country will be freer and entrench democratic governance in the best global order.

“We believe that democracy that is not dictated by the vote of the people is not a good democracy. Until the vote of the people account that is when we can say this is a democracy. And I believe also that is difficult for you to topple such a democracy because it is the people that elect those that are ruling. But if people impose themselves on ordinary people of course such a democracy may not be able to stand on a solid ground. With a little turbulence such a government will fall. In Nigeria we are totally committed to democracy and enduring democratic culture that the votes of individuals will count,” he said.

Dean of the Diplomatic Corps in Nigeria and Ambassador of Burkina Faso, Yamego Dramane commiserated with the country over the security challenges and pledged the cooperation of the diplomatic community in the country.