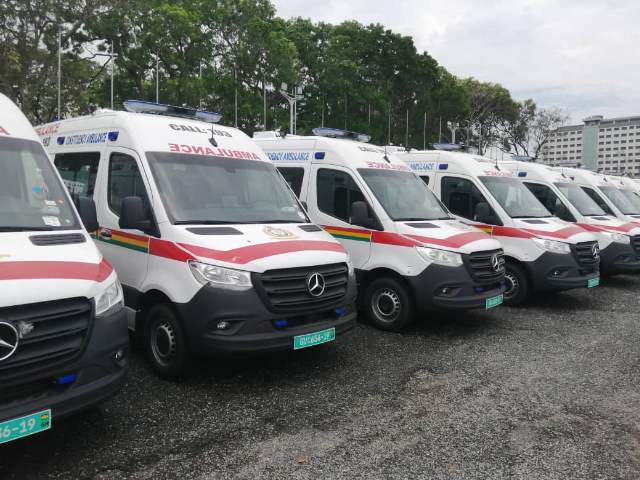 Ghana’s emergency healthcare system is expected to see massive improvement as government has reaffirmed a decision to release some 307 ambulances on Tuesday, January 28, 2019.

A total of 4,000 new jobs are expected to be created with the move as clearance has been given for Emergency Medical Technicians (EMT) staff and training across the country.

Speaking at a Press Briefing in Accra, Minister of Information Kojo Oppong Nkrumah said the project for distribution is funded from government’s 1 Million Dollar per constituency initiative.

The ambulances were procured under the government infrastructure for poverty eradication programme currently being implemented by the Ministry of Special Development Initiatives.

The purchase, follows calls for more ambulances due to the country’s major deficiency in EMT.

Emergency healthcare system literally came to a halt in recent years leaving the ambulance service with just a handful of functioning vehicles and emergency medical technicians.

The John Kufuor administration in 2004, furnished it with an initial investment of some 10 ambulances across seven stations.

But the new purchase and subsequent distribution according to Kojo Oppong Nkrumah, is in fulfillment of President Akufo-Addo’s campaign promise to boost emergency healthcare and general health care delivery in the country.

“In line with the pre-election commitment to improve healthcare delivery, the Akufo-Addo administration has invested in this major boost and expects that it will augment some of its efforts at improving healthcare delivery in Ghana.”

According to the Minister, “clearance has also been given for the recruitment of 575 emergency medical technicians some of them drivers and other auxiliary services, out of which about 400 have already been recruited and trained.”

“The initial deployment of EMT staff is drawn from this 415 staff and an additional 900 staff have received clearance to be recruited that will raise the number to some 1,400 additional staff,” he added.

Concluding his speech, Mr. Oppong Nkrumah urged the Ghana Ambulance Service to properly maintain the vehicles to lengthen its lifespan in order to serve the people for an extended time.

“Government expects that the ambulance service will maintain this investment to ensure longevity. It is further expected that this injection will be put to good use to serve the people of Ghana and to add to the other ongoing efforts aimed at securing lives.”