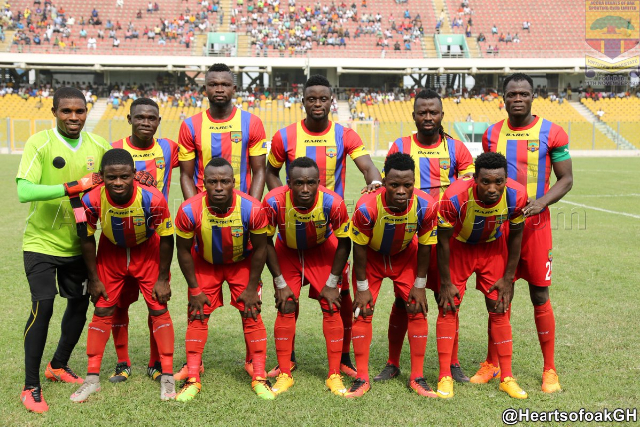 Week 3 of the Ghana premier league will come on in midweek style this Wednesday with Wa All Stars out of action and Bechem United back in action against Kotoko. Wa All Stars and Bechem Utd were this past weekend eliminated from their respective continental tournaments.

Meanwhile, pressure mounts on Accra Hearts of Oak who are winless and yet to score thus far to grab their first win as they take on an improved Ebusua Dwarfs on the road, leaders Aduana Stars may have the win already wrapped up as hosts of Bolga All Stars who were idle this past weekend and were unable to prove their mettle in their maiden road appearance against Dwarfs in week one.

Third place Medeama SC have the advantage as hosts of Inter Allies and Ashanti Gold will look to prove the critics wrong as guests of Tema Youth.

Elsewhere in midweek action, Gt. Olympics will take on Elmina Sharks and Berekum Chelsea will be in search of win number one as hosts of Liberty Professionals.

Inter Allies risk losing a second straight as guests of Medeama at the T&A Park. The Eleven is to One side conceded two goals in the dying embers against Liberty this past Sunday.

However, Medeama performed to the satisfaction of head coach Evans Adotey against Hearts. The team was tactful – frustrating Hearts and should they replicate same display, they may well extend their unbeaten run to three games.

Medeama were victors in last season’s clash against Inter Allies at home. Head to Head record is even with both sides winning two, losing two and drawing twice in their 6 meetings in the topflight.

The Phobians are expected to bounce back to winning ways after stumbling to another stalemate over the weekend at home, but they will have to double their efforts as hosts Ebusua Dwarfs will certainly be no cheap opposition.

As the two teams clash for the 3poiints, it is Hearts who are under pressure to win following two straight ties against Inter Allies and Medeama. New head coach, Frank Nuttal, was on the bench for the first time over the weekend. The Scot lauded his team’s performance against Medeama and will be expecting more against Dwarfs.

Dwarfs though 2-0 losers to WAFA over the weekend sit above Hearts and will be buoyed by the presence of home fans to return to the win column, but the Phobians can be inspired by their somewhat perfect record against the Crabs, having won four times in their last 10 meets.

The Fire club are having the perfect start they envisaged with back to back wins over AshGold and Elmina Sharks. They will be at their favorite home ground against newly promoted Bolga All Stars who lost their debut game and will have it tough finding their form on the road.

Aduana will likely make it a perfect three unless Bolga’s experienced head – Nurudeen Ahmed – comes up with something extraordinary.

Fresh off respective defeats, Olympics and Sharks will be seeking a positive result to get their campaign back on the right track. Olympics were humbled by an impressive AshGold side while Sharks suffered a controversial home loss to Aduana this past Sunday.

Despite the two sides gaining promotion to the topflight this year, Gt. Olympics is the most experienced of the two, having participated in the topflight on many occasions and having won the title twice. Thus, they have a slight edge over the pride of Elmina. Expect an entertaining game which may not be short on goals in the first meeting between the two.

Tema Youth will look to extend their winning record at home to two, but they will have to overcome a rejuvenated AshGold side that bested Olympics 3-1 over the weekend and suffered a last minute loss in their road opener against Aduana Stars and are eager to remain in the winning column.

The Tema based club have had enough rest as a result of their week 2 clash against Bechem being postponed and they will be expected to show more determination to claim the full spoils.

Matches between these two have been keenly contested but AshGold have the advantage with 2 wins and 3 ties in their 5 premier league meets dating back to 2009.

Berekum Chelsea must make the most of home court as they hunt for their first victory of the season against poor travelers Liberty Professionals.

The Blues were lucky to pick a point at their fortress against Kotoko. Much has not been seen from Liberty who despite their win against Inter Allies have to improve on the road. It’s hard to predict their performance but one thing they can be sure of is that a positive result will not come easy on the road against a side desperately in need of points to appease fans.

Fresh off their losing maiden CAF Confederation Cup appearance, Bechem United will be looking to avoid a second straight loss in all competitions as guests of title chasers – Asante Kotoko – who will attempt to capitalize on their fatigued guests.

Given that this will be Bechem’s maiden premier league game of the season, it’s predicable that they will put up a good fight to appease their fans for their early exit but it’s doubtful if it will amount to victory as Kotoko have always handled their business against them.