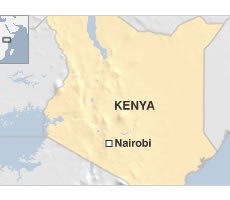 Gunmen have stormed a university compound in north-eastern Kenya.

Heavy gunfire and explosions have been heard at Garissa University College near the border with Somalia.

Two people have been killed and four injured, officials say, but there are fears the casualty toll could rise. Kenyan troops are at the scene.

It is not clear who is responsible for the attack, but Somali al-Shabab militants have frequently targeted Kenya in the past four years.

There are reports that hostages have been taken by the gunmen but this has not been confirmed.

Witnesses have told local media that the attackers struck during morning prayers at the college mosque.

Smoke was reported to be coming from one of the buildings.

One policewoman at the scene told Reuters: "Two guards who were manning the gate at the university have been killed. We can hear gunshots from inside the compound but at this point we can't tell who is shooting at who or what."

One eyewitness, Bashkas Jugsooda'ay, told the BBC he had spoken to one teacher who said students had come to her house at 05:00 (02:00 GMT), running away from the gunfire.

Another witness, Alinoor Moulid, spoke of "intense gunfire and explosions", adding: "According to the students who fled, the gunmen were indiscriminate in their attack, they were shooting everyone on sight."

The BBC's Anne Soy in Nairobi says that because of its proximity to Somalia, Garissa is an easy target for al-Shabab militants and there have been several attacks in the past.

Garissa, 150km (90 miles) from the border with Somalia, has a large population of Kenyan Somalis.

Al-Shabab has carried out a number of attacks in Kenya since 2011, when Kenyan troops were sent to Somalia to help fight the militant group there.

The deadliest attack targeted the Westgate shopping centre in Nairobi in September 2013, when 67 people were killed.

Al-Shabab is fighting to create an Islamic state in Somalia and is banned as a terrorist group by both the US and the UK.