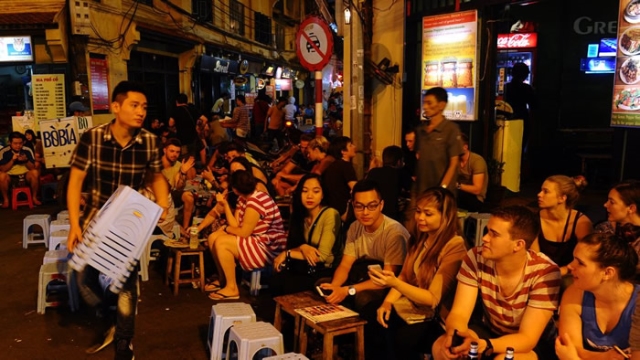 When Gabriel García Márquez visited Hanoi to see how the capital of Vietnam was faring after the decades-long Vietnam War, he discovered a city that sank into a provincial peace around 6 p.m. every evening.
Wandering the streets after sundown in 1979, the Colombian author managed to find a taciturn tavern that served "a strange coffee with salt and some boiled eggs that smelled of flowers at dawn" but little else.
Nearly four decades later, Márquez wouldn't know where to start.
Driven by a youthful demographic — where around two-thirds of the population are younger than 40 — Hanoi has transformed dramatically, especially when it comes to the city's palpable evening energy.
From early evening strolls and performances to late-night bites and jazz clubs, here's how to enjoy the best of Hanoi's nightlife when you travel there:

The Hanoi Opera House, erected by the French colonial administration between 1901 and 1911.
CHRISTOPHE ARCHAMBAULT/AFP/AFP/Getty Images
Even the city's most historic places feel as though they're pulsing with new life come sundown.
Every evening, the storied Hoan Kiem Lake — the spiritual and geographic centerpiece of Hanoi — attracts people of all ages who come in search of a breath of fresh air and an endless range of activities — from walking to jogging, aerobics, tai chi and daydreaming.
It's especially pleasant on weekend evenings, when the otherwise ungovernable traffic is banned from the area, creating a wonderful, laid-back festival vibe all around the ever-enchanting lake.
After a short lakeside stroll, you can head east from the south end of Hoan Kiem to the Hanoi Opera House, which hosts regular performances by Vietnam's National Symphony Orchestra, as well as a twice-weekly modern dance show called Lang Toi (My Village).
This visually stunning production blends contemporary cirque — think acrobats, contortionists and jugglers — with traditional Vietnamese music and themes.
Hanoi Opera House, 1 Trang Tien, Hoan Kiem, Hanoi, Vietnam; +84 24 3933 0113

Inside Manzi art café and bar.
Manzi
Early evening is also the best time to dive into Hanoi's vibrant contemporary arts scene.
"Many tourists aren't aware of how much is going on in this city every night," Pham Hoang Mien, co-owner of event listings website Hanoi Grapevine, tells CNN Travel.
The website aims to list every exhibition opening, art installation and cultural performance in Hanoi, making it a valuable resource for curious travelers.
"If you are into visual arts and want to learn about the contemporary art in Vietnam, the must-visit destination is Manzi art café," advises Mien.
Situated in a beautiful old villa on one of Hanoi's most tranquil streets, Manzi also happens to be a great spot to enjoy a glass of wine.
Manzi, 14 Phan Huy Ich, Ba Dinh, Hanoi, Vietnam; +84 24 3716 3397

Sit down for papaya salad with beef in Hanoi's Old Quarter.
HOANG DINH NAM/AFP/AFP/Getty Images
Even Barack Obama couldn't resist the appeal of Hanoi's street food.
Last year, while US president, Obama joined Anthony Bourdain for a dinner of bun cha (barbecued pork served with airy rice noodles).
You could follow their footsteps to Bun Cha Hoang Lien cafe and order the Obama Combo, which includes a serving of bun cha, seafood spring roll and a bottle of Hanoi Beer for a princely $4.
But, whisper it. Bun cha is really a lunchtime dish.
For dinner, Tracey Lister, the Australian author of "Vietnamese Street Food," advises travelers to wander the frenetic but fascinating Old Quarter — a centuries-old district dedicated to craft, trade and, nowadays, tourism — to seek out the most popular vendors and dive in:
"The Old Quarter morphs into a different being at night. It's a good time to eat on the street too, as the city slows down a notch — not too much, just enough to enjoy a breeze blowing through the laneways."
Bun Cha Hoang Lien, 24 Le Van Huu, Hai Ba Trung, Hanoi, Vietnam; +84 24 3943 4106

Vietnamese flavors at the Standing Bar.
From Standing Bar
Conveniently enough, the Old Quarter is also the perfect place to drink a glass (or two) of bia hoi.
Often consumed streetside from tiny plastic stools, the Hanoi proletariat's beer of choice will set you back as little as 25 cents a draft.
In the evening, young travelers gravitate to what's known as Bia Hoi Corner, to trade travel stories over cheap eats and beer.
“The Old Quarter morphs into a different being at night. ”
Tracey Lister, 'Vietnamese Street Food'
But for a more local (read: less touristy) experience, and far superior grub, head for 1A Duong Thanh Street on the western side of the Old Quarter — about a 10-minute walk from Bia Hoi Corner.
Bia hoi is an easy, and ubiquitous, option if you're simply looking to cool off with a light lager.
And for those seeking high-quality, craft beers? We'd recommend making a beeline for the Standing Bar.
The city's first dedicated taproom overlooks the tranquil waters of Truc Bach Lake and gets creative with its recipes.
"We have something for everyone — pale ales, IPAs, pilsners, stouts, ciders, you name it," Huong Anh, the Hanoi-born manager, tells CNN Travel.
"What people love is that they're all brewed here in Vietnam and many of the beers use local ingredients, from jasmine and coffee to cashew and chocolate."
Bia Hoi Corner, intersection of Luong Ngoc Quyen, Ta Hien and Dinh Liet Streets, Old Quarter, Hanoi, Vietnam. The area closes at 2 a.m.
Standing Bar, 170 Tran Vu St, Truc Bach, Hanoi, Vietnam; +84 24 3266 8057
Made fresh daily, bia hoi is a popular type of Vietnamese draft beer. The cost? Less than 25 cents a glass.

Hanoi Rock City's Red Room.
From Hanoi Rock City
The longest-running live act in town might still be found at the Thang Long Water Puppet Theater, where a traditional Vietnamese orchestra accompanies a short puppet show.
Based on a tradition that traces its roots back to the 11th century, the short, nightly shows relate classic Vietnamese folk tales and legends.
But for more contemporary sounds, Hanoi Rock City lures music lovers with its fresh, eclectic performances.
"We have always hosted a diverse range of acts in our Red Room and in the courtyard — folk, reggae, jazz, indie, grunge, hardcore … you name it," co-founder Duc Anh tells CNN Travel. "We just want to showcase great music in Hanoi."
Around town, other notable venues for live music include The Doors Cafe, Rafiki's, Binh Minh Jazz Club and Hanoi Social Club.
Tags: