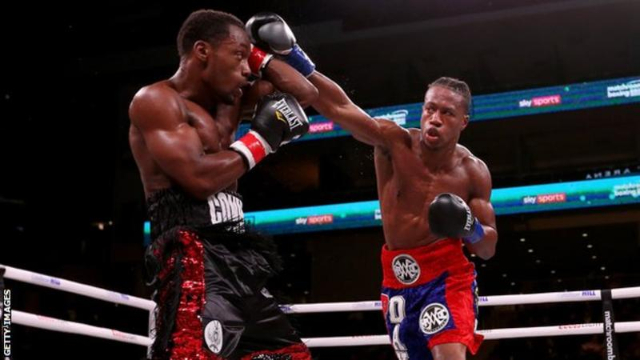 Promoter Eddie Hearn has broken down in tears in paying tribute to American fighter Patrick Day and says boxing must unite to make the sport safer.

Day died at the age of 27 on Wednesday, four days after suffering a brain injury in a 10th-round stoppage defeat by Charles Conwell in Chicago.

The bout took place on a bill promoted by Hearn’s Matchroom Boxing USA.

After becoming upset, Hearn told IFL TV: “You can say ‘it’s boxing’ but it is so hard to justify.”

“There are so many things we can look at as a community, particularly [brain] scans. One of the issues is the frequency of scans in my opinion. You can have a yearly scan but sometimes it doesn’t take into account the fights you have had since that scan.”

BBC Radio 5 Live Boxing’s Steve Bunce and Mike Costello, and American boxer Regis Prograis have all had their say on how boxing can be made safer.

Bunce said: “I have been ringside in the last 30 years for half a dozen deaths and maybe 12 or 15 other fights where boxers have been rushed to emergency procedures.

“I have studied it, its an odd business and I love it, it’s what I do for a living but at the same time it is a sport that is indefensible. But, at the same time, boxing and boxers make perfect sense to me.

“I genuinely cannot see, I have wracked my brains, to come up with anything that can make boxing safer. In Britain, the British Boxing Board of Control (BBBofC) have the worlds’s finest safety measures yet we still have deaths. It is that simple, there is nothing that can be done.

“It’s when you go and meet people at a gym in the worst part of a city and you take their testimony of how this sport has saved their life. That may sound like cliche rubbish and I understand how it looks but that is the bottom line. Unless you are in the business, you can’t understand it. But I am not defending it, it is impossible to do so.”

Bunce questions whether the idea of scanning fighters before each fight is viable given the costs involved in doing so but says clamping down on white collar boxing events – where competitors pay to fight – would be a step forward.

His 5 Live colleague – BBC boxing correspondent Costello – also said the cost of head scans at every fight night would prove an issue and that fighters policing their own health can be key.

Costello said: “If they feel rough, have headaches, then don’t fight. Unfortunately they get this buzz, this addiction and this opportunity they have to change their life, sometimes it can be the ending of a life.”

Day’s fatal bout was sanctioned by the State of Illinois commission and Hearn praised the speed with which oxygen was administered and how Day was treated before being rushed to hospital.

The BBBofC – who sanction the majority of fights in the UK – has stringent rules in place stating a fighter must pass an annual medical – which includes an MRI scan – and also ensures fight nights meet rules.

The organisation’s chairman Robert Smith told BBC Radio 5 Live: “We work very hard to make the sport as safe as possible but as I have always said, we cannot make the sport 100% safe.

“The medial provisions changed over the last number of years have been immense. But when a boxer gets in the ring he understands the risk and that doesn’t make it right when things go wrong.

“Every boxer will have an annual medical which will cover your brain scans, MRI, bloods, physical examinations, eye tests, etc. Before every bout you are medically examined to make sure you are fit. After the bout you are examined again and if a doctor has any doubts he can put conditions on you boxing again in the future, so it’s very strict.

“Ultimately, it is very difficult to stop these things happening. If you think about the amount of contests and tournaments that take place throughout the world, the number of incidents is relatively small. That doesn’t make it right.”

‘You become a different person in ring’

Patrick Day won 17 of his 22 fights, with four defeats and one draw

Day – who had a university degree – started boxing at the age of 14 and had lost three of his 21 fights before facing the unbeaten Conwell.

The New York-born fighter was knocked down in the fourth, eighth and 10th rounds in Chicago and suffered seizures on his way to Northwestern Memorial Hospital, where he underwent brain surgery.

Those closest to him – including promoter Lou DiBella – said his fighter “didn’t need to box”, but did so for the love of it.

YouTube videos of Day speaking before his debut in 2013 capture him stating he took up the sport because he wanted to “have something to do” and that he was a “kid who wanted to be part of something”.

American fighter Prograis, who is in the UK to face Scotland’s Josh Taylor in a super-lightweight world-title contest on 26 October, said he met Day on numerous occasions and claimed the late fighter was “always happy”.

Prograis, 30, said Day’s death underlined the dangers faced in the ring, and he gave 5 Live Boxing an insight into the mentality many competitors in the sport adopt in the face of danger.

“As fighters you feel like nothing can stop you,” said Prograis.

“Sometimes you really feel like that, that you’d rather die in the ring. Hearing myself say it right now, it sounds crazy but when you’re in there you feel like ‘I’m not going to stop, you have to almost kill me to stop me’. That is the mindset of a fighter where in your heart you have that.

“I have kids, a family, people who love and depend on me but when you’re in there it really does feel like none of that matters.

“This is not the person who will walk to the ring. The words I say now sound crazy but I know how I feel when I get in the ring. A lot of fighters bring that same mindset to the ring. But you do become a different person.”

Calls for bans and a Day legacy

Brain injury charity Headway reiterated its stance on wanting boxing banned following Day’s death, citing the cases of other fighters who have died in the ring in 2019.

After offering condolences and support to Day’s family, the charity’s chief executive Peter McCabe said: “How many more lives have to be needlessly damaged or lost before this senseless sport is banned?”

Countless fighters – past and present – have paid tribute to Day, including the likes of former world cruiserweight champion Tony Bellew, who urged fighters not to “prolong your stay in the business”, adding: “Get in and get out.”

In confirming Day’s death, his promoter DiBella said the tragedy can be a “call to action” to improve safety.

Hearn concluded: “Knowing what these guys give, we have to make sure as a sport we do better. We need to respect these fighters. There is no one to blame, it is a tragedy of the sport. We have to make sure the positive effect Patrick had on the community remains.

“The outpouring of love shows you the special person he was. He loved the sport, we love the sport but we must never take it, or the fighters, for granted.”