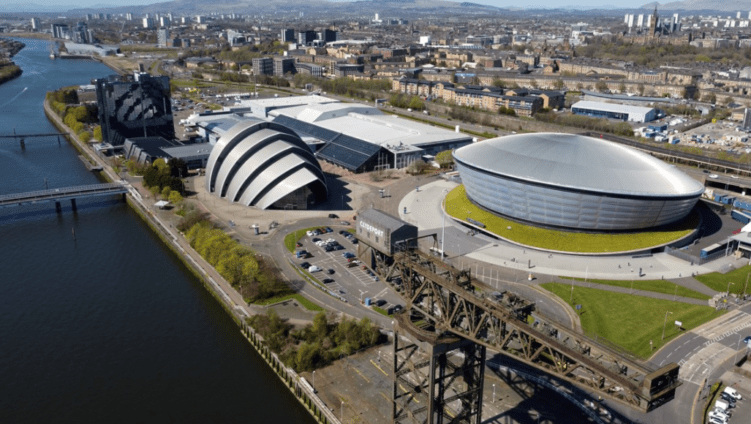 The COP26 venue in Glasgow UK

The United Kingdom is hosting the largest ever international gathering of leaders and officials on its soil – with over 30,000 delegates and 125 Heads of State taking part.

The specially expanded venue dominates Glasgow’s River Clyde waterfront.  An important corner of that site is the Ghana Pavilion – from where Ghana’s impressive delegation will represent the country at an event which the UK Prime Minister, Boris Johnson, has called ‘a turning point for humanity’.

The COP26 venue in Glasgow UK

The effort and the expense will be worth it if COP delivers what the world needs:  a commitment to limit temperature changes to within manageable levels, and a commitment to pay for the costs of adapting to the changes in the climate that we can already see around us.

As the British High Commissioner to Ghana, my work has been dominated by COP for some time, as have my conversations with His Excellency the President, activists, the media, Government officials, Ministers, traditional rulers and even musicians (thanks for your support, Okyeame Kwame!).

I have been struck by the many different ways Ghanaians care for the environment, how dramatically climate change will affect the nation, and the overwhelming moral urgency of the argument that Ghana’s representatives at COP26 will make, led by His Excellency the President.

It is incredibly important that the world listens to Ghana.  It is a leading voice amongst those countries that have had little to do with creating the crisis, but are nevertheless paying for it:  through coastal erosion, desertification, and more intense bad weather such as droughts and floods.

In a country where millions depend on agriculture, this is a crisis not just for a few Ghanaians, but a crisis for the nation.  And it will take a truly national effort – as well as global partnership – to protect Ghana’s livelihoods, forests, waterways and cities from the changes that we know are on the way.

Two facts have stuck with me above all others, and between them they demonstrate the injustice of climate change.  First, that Africa is responsible for less than 4% of the world’s emissions.  Second, even if we can limit global warming to 1.5 degrees – our most optimistic scenario – then 75% of the land that Ghana uses for cocoa will no longer support that crop.

The Ghanaian delegation will go to Glasgow with some clear and challenging messages: it is time rich countries made good their promises on climate finance; it is time to spend more on helping people adapt to climate change, especially in poorer countries; and it is time for rich countries to accelerate the transition to a lower-carbon world.

I stand wholeheartedly by these arguments, as does the UK. As the chair and president of COP26, the UK has prioritised climate finance commitments, and I was happy to learn this week that by 2023 we now expect to see $113bn a year of climate finance flowing as countries are pushed to contribute more.

The UK has also been in the forefront of climate reduction – with a record-breaking target of reducing its emissions by 78% by 2035.

There are costs to a transition to a cleaner world.  But there are many benefits, even – especially – economic ones.

The UK expects to create hundreds of thousands of well-paid “green” jobs, and mobilise £90bn in private sector investment by 2030, as a result of its ‘Net Zero Strategy’.

With the right investments and policies, Ghana too can accelerate its transition in a way that benefits its economy, its people, its rich natural diversity, and the world’s climate.

While there may be a moral case for Ghana to use its fossil fuels as other countries have, the economic argument is no longer as strong.  As the cost of renewables comes down, investment in fossil fuels becomes ever higher risk.

We wish Ghana every success at COP26.  We hope its voice is heard, and that its delegation returns with new networks, allies and partners committed to investing in Ghana’s adaption and transition.

Then the hard work really starts – when agreements must translate into better yields for farmers, more resilient cities, and a more prosperous, greener Ghana.

The UK is ready – both during COP and long after the delegates have left – to help Ghana seize that reality.

The writer, Harriet Thompson, is the British High Commissioner to Ghana