Ho at a standstill as residents march to mourn Mills 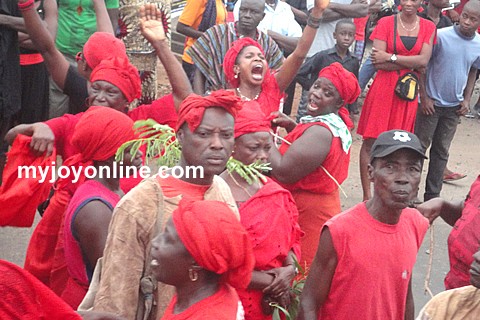 The Volta Regional capital, Ho, is at a virtual standstill as residents of the town are embarking on a solemn procession in honour of the late President John Evans Atta Mills.

Regional Correspondent, Agbeko Ben-Coffie reported he had never seen such a large number of people.

All the principal streets of Ho, he said, have been turned into a sea of red, with black patches.

The procession was organized by the Regional Co-ordinating Council and was intended to culminate in a rally at the offices of the RCC where the crowd would be addressed but that looks unlikely now, by virtue of the huge numbers.

Police are finding it an arduous task controlling the crowd, given the sheer numbers, Agbeko reported.

The Volta Region is the political World Bank of the governing National Democratic Congress which the late Prof. Mills led to victory in the 2008 elections and the outpouring of grief and love for the late president was not unexpected.