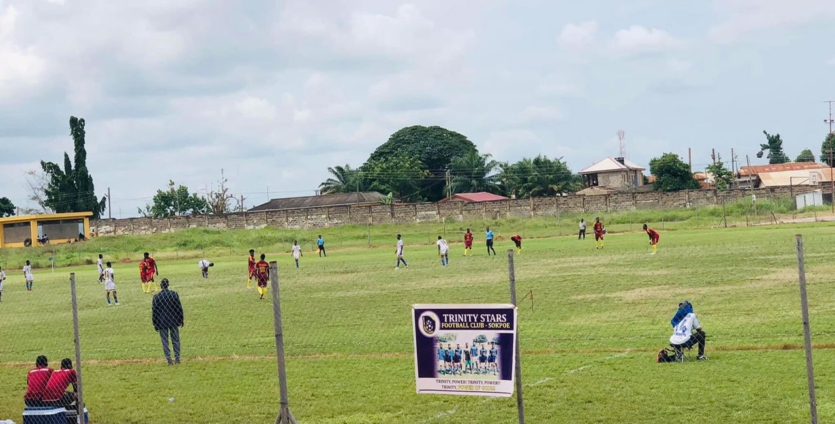 The Member of Parliament for Ho Central, Benjamin Kpodo, has advocated for a stakeholder approach to rehabilitate the Ho Sports Stadium.

The sporting facility has one of three standard football pitches in the Volta and Oti Regions. It however, cannot host a match after 15 minutes of rainfall due to its poor state.

“After the Vora Sporting Club match, the rain set in, as you can see the pitch is already flooded, I don’t know what will happened to the next match” said Mr. Kpodo when he attended a day two fixture of the ongoing Volta Division Two Middle League.

He entreated the Regional Football Association to lead to engage all stakeholders to deliberate on a complete overhaul of the stadium, to a befitting status.

He acknowledged the development of football in the region and hence questioned the decision to invest resources into the construction of a new sporting facility, in Adaklu, instead of rehabilitating the existing one.

He threw his support behind Vora Sporting Club and promised a cash donation to help administer affairs of the team in the ongoing Division Two Middle League.

Vora SC tops Group A with 3 points, after beating Roberto FC in the day two fixture.

Young Desert Warriors occupies the second position with 3 points. Their game against third-placed Agbogba FC was rained off, and rescheduled for Thursday 30th June 2022 at 9 am at the Ho Sports Stadium.

The defeat to Roberto FC saw them off from the league, as it lies bottom of the table with 1 point and a match at hand.

Rangers FC are leading Group B with 3 points and two goals. They trashed Sharp FC in their group opener, while Kickers FC clinched all 3 points in their encounter with Trinity Stars.

The match day two for the group is slated for Thursday 30th June 2022 at 1 pm and 3 pm at the Ho Sports Stadium.