Afcon qualifiers: How Ghana can lineup against South Africa and Sao Tome 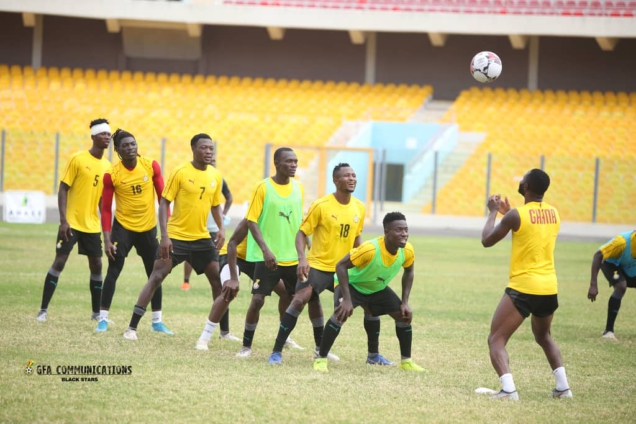 On Thursday, Charles Kwablan Akonnor, with the approval of the Ghana Football Association, quietly released a 29-man squad for the final round of the Africa Cup of Nations qualifiers.

Unsurprisingly, big names like Thomas Partey, Andre Ayew, Jordan Ayew and Joseph Aidoo were not included due to COVID-19 concerns from their respective clubs in the United Kingdom.

Ahead of the game against South Africa on March 25 and Sao Tome and Principe on March 28, CK Akonnor would have to rethink his usual setup.

He is certainly not without options as he looks to secure qualification for next year’s AFCON.

The Joy Sports team put pen to paper to draft what might be close to the best possible XI from the squad selected.

For starters, the use of the 4-2-3-1 formation would be the best choice for the two remaining matches. This would need a goalkeeper, four defenders, two central midfielders, an attacking midfielder, two wingers and a center forward.

The lineup should of course have a perfect blend of experience and potential to maximize results.

The goalkeeper selected is Richard Ofori. The former Maritzburg man is expected to be captain for the two matches.

The main, Andre Ayew, and first vice, Thomas Partey, will not be available and so the Orlando Pirates shot stopper will be expected to lead.

The full backs is a tough one as all four have made good individual cases to start. However, the team have gone with Gideon Mensah on the left and Benson Anang on the right.

Anang has played for the national team already and would be better quipped for the games as compared to Philemon Baffour. Mensah has been a regular for Portuguese top-flight side Vitoria Guimaraes and has performed admirably this season.

Stephan Ambrosius and Kasim Nuhu get the nod for the center back positions.

The duo have not played together due to the recent inclusion of Ambrosius who has been a regular presence for HSV Hamburg this season. Nuhu offers experience which might serve Akonnor well in the upcoming games.

In central midfield, Joy Sports have gone for Mubarak Wakaso and Gladson Awako. Wakaso provides solidity and on occasion can link defense to attack.

Awako, as he has constantly shown with Great Olympics this season, can control the tempo and drive forward when the opportunity arises.

Mohammed Kudus without doubt should take the attacking midfield position. Despite recently returning from injury, the 20-year-old has shown enormous quality when fit and would be a good weapon against South Africa especially.

Osman Bukari and Kamal Sowah were selected as the wingers. Bukari has been a bright light for KAA Gent this campaign, recording 10 direct goal involvements in 24 Belgium top-flight matches.

In attack, Caleb Ekuban was the Joy Sports choice. The 26-year-old has scored six times this campaign and is one of the experienced attackers in the side.

In reality, Akonnor will certainly have other ideas when it comes to selection of personnel and tactics.

Whatever choice he makes, it should hopefully bring dividends.

DISCLAIMER: The Views, Comments, Opinions, Contributions and Statements made by Readers and Contributors on this platform do not necessarily represent the views or policy of Multimedia Group Limited.
Tags:
Black Stars
Black Stars squad