"I am still under training" - Loretta Larbi, emerging classical musician from Ghana - MyJoyOnline.com

“I am still under training” – Loretta Larbi, emerging classical musician from Ghana 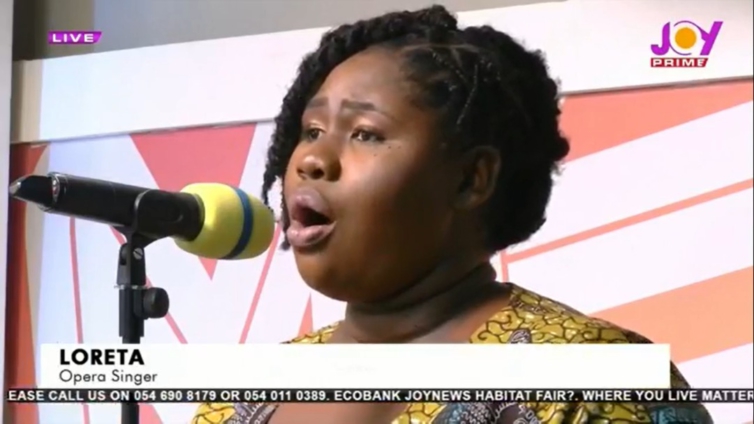 The principal Soprano for the One Voice Choir Loretta Larbi has revealed plans being made to reach the pinacle of her career as an opera singer.

She made this known during an interview on Joy Prime where she also performed a number of pieces including some local tunes.

The talented Loretta Larbi appeared on Joy Prime’s morning show after debutting at the annual Law Dinner Awards night organised by the Students Union of the University of Ghana Law School.

She intimated she had been actively singing chorale pieces for almost a decade until she recently took special interest in classical music as a soprano.

Her expansive vocal range for mezo-soprano and soprano pieces evinces her potential.

She added that she drew her inspiration from the America’s opera singer, Jessye Norman of blessed memory.

Aside her tedious life as a student, Ms. Larbi manages to make time for a virtual voice training class in the United States despite the time difference.

She also manages to play private gigs when she is not performing with her choir.

Miss Larbi is a soprano taking the time-tested route from choral music to classical and opera music.

Her expansive vocal range makes her comfortable with soprano and mezzo-soprano pieces. She holds a first degree from the University of Ghana in Linguistics.

She is currently studying voice privately in Chicago.