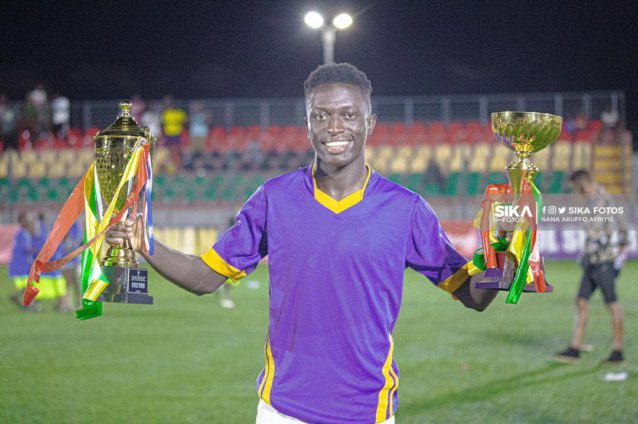 Tema Youth midfielder Emmanuel Owusu says it was a dream come true for him after scooping two top individual awards in the just ended Division One League Super Cup.

Speaking to Joy Sports, the midfielder expressed his delight after winning the awards while adding that it was always one of his targets to win such accolades.

“I have been working for this for a long time. I knew I had the abilities to win these so I am very happy,” Owusu said.

Tema Youth finished second in the maiden edition of the DOL Super Cup, losing to Daboase-based Skyy FC 7-6 on penalties.

The Tema-based side narrowly missed out on promotion last season as they finished as runners up in Zone three of the Division One League.

The youngster explained that his side are going to take motivation from the competition and try to work their way back to gaining promotion to the Ghana Premier League.

“I am very happy but sad also because this is not what we wanted. We came second, so I think it’s okay for us,” he continued.

“This is not the end of the road. I am working extra harder. I am praying we qualify to the Premier League next season.”

Owusu scored four goals in five games for Tema Youth, including the header in the final which canceled out Ebenezer Mamatah’s opener.

DISCLAIMER: The Views, Comments, Opinions, Contributions and Statements made by Readers and Contributors on this platform do not necessarily represent the views or policy of Multimedia Group Limited.
Tags:
Division One Super Cup
Emmanuel Owusu