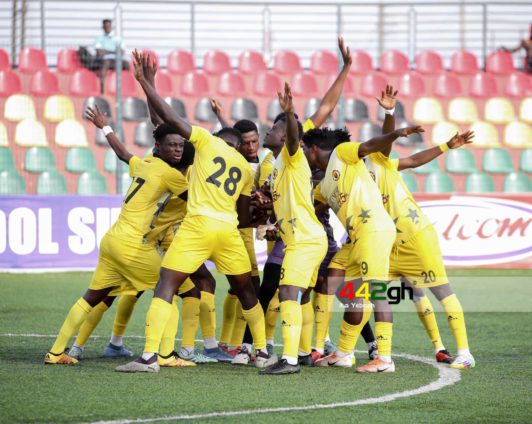 The maiden edition of the Division One League Super Cup will conclude on Saturday, October 23, at the Madina Astro Turf.

The competition, which commenced with eight teams from the three zones of division one is now set for a closure this weekend as Tema Youth and Skyy FC go head-to-head in the grand finale.

Both teams finished first and second respectively in Group A during the group stages, with just two points separating them.

During the group stage encounter between this pair, Tema Youth came back from a goal down in the first half to salvage a point as they topped the table.

Going into the grand finale, both teams look well-prepared after impressive victories in the semi-final stage. Tema Youth beat Samartex with a 2-1 scoreline while Skyy come into this game off the back of an extra time winner against Accra Lions.

The center referee for the clash will be Jacob Assafuah with James Osarfo and Ernest Akatey supporting from the touchlines.

Tema Youth have five goals in the competition so far, conceding only two goals – one less than Skyy have shipped in all tournament.

The game will see one of the two sides being crown the winner of the maiden edition of the Division One League Super Cup.

Before the decider, Accra Lions and Samartex will face off in the third place play off at 9am.

The third place play off game will be see Edward Anane take charge as the center referee, assisted by Joseph Laryea and Seth Abletor.