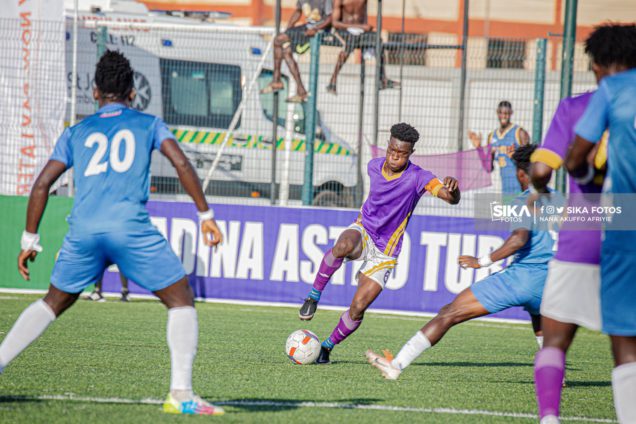 Skyy Football Club, on Saturday, defeated Tema Youth on penalties to win the maiden edition of the Division One League Super Cup at the Madina Astro Turf.

The Daboase-based side defied all odds as they toppled the Zone Three side to claim the trophy.

Skyy beat Tema Youth 7-6 on penalties after dramatic end-to-end action in the 120 minutes of action.

The DOL Super Cup was an initiative put in place to crown the best division one side in the country as they prepare for the 2021/22 season.

Having found themselves in the same group, Tema Youth and Skyy FC advanced to the final of the competition following their wins in the semi final.

Skyy started the game on a stronger foot, forcing saves from the Tema Youth goalkeeper, who was on hand to keep his side in the game in the early stages of the encounter.

However, Ebenezer Mamatah broke the deadlock after 15 minutes as he sent a thumping header past the Tema Youth goalkeeper to put Skyy FC in the lead.

Having conceded their third goal in the competition, Tema Youth responded very well to going down inside the opening 20 minutes as they continued to created chances.

Emmanuel Owusu, who finished as the tournament’s top scorer, got them the equalizer with a header in the dying embers of the first half.

Returning from the recess with a 1-1 scoreline, both teams tried to snatch a win within the second period of the game, but to no avail as the final headed into extra time.

The extra 30 minutes also saw impressive attempts at goal with both keepers coming to the scene to send the game into penalty shoot-outs.

With no clear favourites in the shootout, it was Skyy FC who came up on top as they won 7-6 to win the Division One League Super Cup.