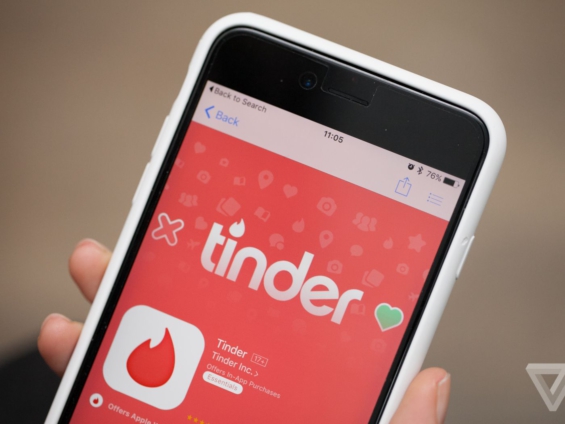 Eighteen hours later, we met in real life. Six weeks to the day of our first meeting, we got married at the scale replica of the Greek Parthenon here in Nashville, TN.

You read this correctly: I fell in love with and married a man I met through Tinder after knowing him for six weeks.

You might think I’m absolutely insane, but I’m pretty damn confident I’ve made the right choice. In fact, I think Elliot and I are soul mates, which wasn’t even a concept I believed in seven weeks ago. I’m not foolish enough to think things are always going to be easy for us, but I couldn’t be a bit happier, and neither could our families.

Six weeks ago, I was a few months out of a very long-term relationship. To be honest, I was feeling more than a little bitter about my prospects of ever dating, let alone getting married, again.

After a positively horrifying 18 hours on OkCupid that culminated in 500 creepy matches and a date with a Vanderbilt medical student who tried to undress me outside a bar, I wasn’t feeling hopeful.

On one Thursday morning in mid-February, I ran an elimination algorithm on my chances of ever finding a man I’d be willing to sleep with on a recurring basis. Forget marriage; I’d settled for the idea of “tolerable for brief periods on a recurring basis” at that point.

The results? There were less than 900 men in the entire world that I’d even be willing to allow in my presence.

I might sound picky or snooty, but I think I’m more realistic than anything else. I’m trained as an engineer, and I appreciate other people with a neurotically structured approach to getting stuff done.

I’m a pretty hardcore metal head and I’ve got something of a ridiculous knowledge of obscure thrash bands, especially Russian ones and old ones. Health is massively important to me. Oh, and I’m a practicing witch and also collect some oddities.

It’s safe to say that through both choice and experience, I’m a darn weird chick and I wasn’t getting any more normal.

I decided what I needed was best summed up with the Type O Negative’s lyrics “She’s in love with herself.” I vowed to not date anyone seriously, but just find some men I could tolerate on a semi-regular basis, and keep them at a good arm’s length. I downloaded Tinder and wrote a bio that explained I was only looking for someone to “buy me vodka once a week.”

Four hours later, I swiped right and immediately matched with a long-haired blond boy who plays guitar in one of Nashville’s best thrash metal bands. We started talking and stuff became super weird.

Weird how? We texted for four hours, and it was clear that we had all sorts of commonalities when it came to music, lifestyle, preferences, and more. And oh my goodness, the chemistry that was flowing between us. It was absolutely insane.

Out of my requirements on the bio, he only met 2 of the 5. Elliot isn’t tall (5’10”), I wouldn’t quite describe him as overeducated, and he’s every bit as much of a clumsy, klutzy hot mess as I am. But he’s nerdy, charming, gorgeous, and one hell of a rising metal star.

I believe in his talent, and I believe he’s my soulmate, and I don’t believe in much of anything.

Eighteen hours later, I took a long lunch break from work and drove across Nashville. I was less than a mile away from meeting Elliot before I realized how incredibly foolish I was potentially being. I got out of my car, shaking, and fell into the arms of this man who was even prettier than his pretty Tinder pictures. I felt like I’d missed him for years, and maybe even more as I’d finally come home.

The rest of the story? We both knew immediately that something really weird was up. Lots of people have decent chemistry, but this was something entirely different. We kept talking after that first meeting, and pretty much haven’t stopped since. We’ve spent less than a handful of nights apart since we met on 2/13/2015, and have this incredible ability to get completely lost in conversation for hours or even days.

No, Really. Why did you MARRY him?

Elliot and I have yet to disagree on anything significant, except for the fact that I think brown rice is really kinda vile (I’m sorry, but I do). Aside from that, we’ve had commonalities and even weirder circles. I quickly uncovered that the lines on our palms matched.

On our third date, I took him to a psychic in hopes she could help him with some ancestor work he was interested in doing. She did help get him pointed in the right direction but also suggested strongly that he and I were soulmates.

At the first show, I attended after two weeks of dating, dozens of people commented on how “cute” we were together. Some well-respected musicians who headlined the show thanked me for his ridiculous shredding guitar solos that night.

Our time together has ranged from the totally mundane (going for walks and out to breakfast like normal people) to the absolutely ridiculous.

I never thought I’d have the ability to get lost in someone’s bed for 24 hours, but I finally found it. I know that’s the stuff of romance novels, and I’m a girl with a serious need for personal space. And I’m here to tell you that the level of chemistry where you get absolutely lost staring at each other’s faces to the point your phone dies and you’re late for work? So late for work, you’re absolutely outside of time and your co-workers file a missing persons report? Um, right.

This type of chemistry exists, and it’s real, and I found my dang soulmate on Tinder.

After we’d been dating exactly one month, Elliot drove me an hour south to rural Middle Tennessee to meet his family in his small hometown.

His mother and I immediately connected on vintage clothes and art, and I felt immense like I was at home. It didn’t matter that I grew up across the country in rural Northwest Washington where grunge was born, and I was sitting in the very elegant home of a proper Southern lady. I wanted her to be my Mama.

During the drive home, Elliot asked me to marry him. I did something really mature like covering my face and shrieking “no” repeatedly.

That night, we went to a metal benefit concert. He asked me again, and I accepted. The engagement was announced on stage while the entire venue cheered for these two young lovers. A week later, we decided to get a marriage license and elope, with the intention of keeping the marriage secret for at least several months.

We told our families, and our very normal parents weren’t shocked as they should have been. In fact, my mother asked, “What took you so long?”

We married at the Parthenon, with the reasoning that it was the largest pagan temple in the Southeast United States. Our vows referenced our love for graveyard walks and metal shows.

Our wedding night included massive amounts of delicious food (our favorite), Cheap Trick covers at a beloved Nashville music venue, and running around Nashville’s downtown party district in our wedding clothes. We ate at Waffle House at 6 am to renew our energy before finally crashing at around 8 or 9 in the morning.

Our secret marriage lasted a grand total of 28 hours before we announced it on Facebook.

Honestly? Is that crazy?

I’m not saying it’s easy to get married to someone 6 weeks after the meeting. It’s hard. We’ve certainly caught our fair share of concern from friends, some of which hasn’t been comfortable or remotely kind.

The logistics of managing adult stuff like moves, leases, and even legal name changes so quickly is downright tough. However, Elliot’s stated that he knew he wanted to spend every minute of the rest of his life with me, and I couldn’t disagree one bit.

I know the statistics on divorce. I’ve been through a failed, long-term relationship, and I know that extricating yourself from years of living with someone is expensive, tough, and painful.

While Elliot and I have never fought so far, I understand that there’s a good chance we’ll hit snags. However, I’m hopeful, and I don’t think I have any reason not to be. Regardless of what some people think, I believe I was born to love this man and his music, and this control freak is finally, finally learning to go with the flow.

DISCLAIMER: The Views, Comments, Opinions, Contributions and Statements made by Readers and Contributors on this platform do not necessarily represent the views or policy of Multimedia Group Limited.
Tags:
Married
Tinder