IEA Presidential debate: Some reactions from the social media 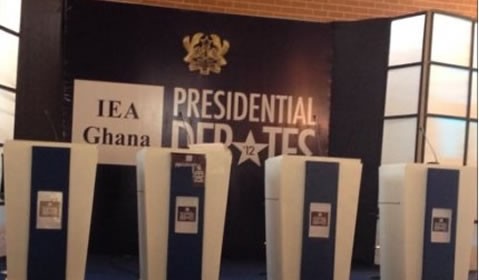 While the IEA presidential debate among the four political parties with representation in parliament – NDC, NPP, CPP and the CPP – was going on in Tamale, social media platforms such as Facebook was inundated with comments on the historic event.

Several known personalities including Gabby Otchere-Darko, Executive Director of the Danquah Institute, Edward Omane Boamah, Deputy Sports Minister, and Komla Dumor of the BBC had their take on the debate.

Below are some of the submissions:

“Abu Sakara has hit the free education nail right on John Mahama’s head. He says he enjoyed free education on 3 levels and he believes most of his colleagues here today would not be standing here without free education.”

“Mr President you say making the Vice President, Chairman of the National Development Plan Commission will politicise it. So who is P V Obeng? And what is on his political CV? And why did you say in your ’08 manifesto that the President would chair the Commission? You were right about the confusion, but in who’s mind?”

If this Q&A will be won based on Big English, WILD ALLEGATIONS and SPURIOUS FIGURES…..then NANA ADDO will be on top.

Some radio stations are still doing damage control for Akufo Addo. Imani officer in studio helping perpetuate that agenda. Kofi Bentsil of IMANI says Nana Addo is inspiring him tonight with a lot of substance. We leave that to your judgement.

Listening to the Ghana presidential debate-good for the country’s democracy.I’m sure each side will say their man won. PNC candidate Ayariga ..

Akwasi Sarpong (BBC):
Are you an avoidable or absorbable graduate? Are you prepared to grow cassava in Bawku? You know who to send your applications to. #Ayariga

1. Employ youth to pave the country… Youth in pavement works.

Did Nana Addo hear the health question? What are the 3 challenges and how’ll u solve them?