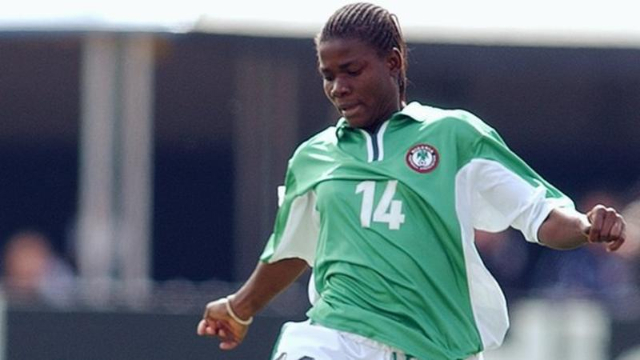 One of Nigeria’s most successful women’s internationals, forward Ifeanyi Chiejine, has died aged 36 after a long illness.

Chiejine, who played for Nigeria at the 2000 and 2008 Olympic Games, won four Women’s Africa Cup of Nations titles.

“This is a great loss, she briefly mentioned her illness to some of us, but didn’t say exactly what,” her former teammate Rachael Ayegba told BBC Sport.

“Chiejine was a shining star as a player, yet she died just like that. We need to do more for our current and former players.”

She was the youngest player at the 1999 Women’s World Cup in the United States and went on to play at the 2003 and 2007 tournaments.

“We are sad to announce the sudden demise of our former Super Falcons player. Rest in peace, Ifeanyichukwu Stephanie Chiejine,” the Nigeria Football Federation (NFF) wrote on social media.

Chiejine, nicknamed ‘Smally’, will be fondly remembered for her outstanding display at the 2007 African Games in Algeria.

She finished as the tournament’s top scorer with five goals to help her country win Gold at the Continental Games in North Africa.

Locally she played for Flying Babes FC, FCT Queens of Abuja and the Pelican Stars of Calabar.