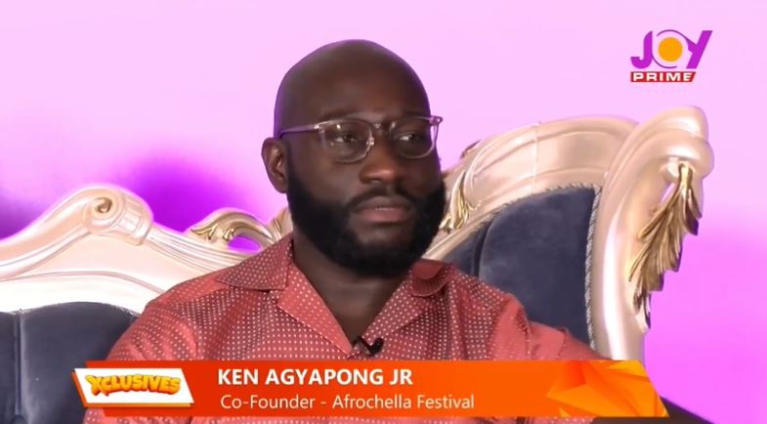 A son of the Assin Central Member of Parliament has said he is not, and has never been affected by his father’s popularity and influence.

In an interview with Noella Kharyne Yalley on ‘Xclusives’ on the JoyNews channel, Ken Agyapong Jnr indicated that contrary to beliefs that he has an easy life due to his father’s reputation and influence, he works extremely hard for his successes.

The Afrochella Festival co-founder added that his dad, from an early stage, instilled discipline in him.

That, according to him, has shaped and helped him plan his life very well.

“Three to four years ago, I went on a TV show with him and people were like, ‘that’s your dad, can I take a picture? Your dad is Honorable Kennedy Agyapong and you’re working?’ And I was like am I not supposed to work?”

“When I was younger, my dad used to always say you have to work hard, and I think that helped. When I was about 16, he was like ‘you have to wake up early [because] if you wake up early, you can start planning things.’ So, consistently, even if I plan to go out or not, I wake up at 4:30 am or 5:00 am at most.

Ken Anyapong Jnr also revealed that he shares some character traits with his dad.

“I’m still the same Kenny, I don’t go around saying my dad is Kennedy Agyapong because if I’m in America, nobody is going to say who is your father. So I don’t want it to get to my head at all. I’m very calm and cool but I’m wild sometimes.”

‘Xclusives’ hosted by Noella Kharyne Yalley brings you riveting conversations predominantly on showbiz, with guests from all walks of life; including academia, politics, sports and more.

DISCLAIMER: The Views, Comments, Opinions, Contributions and Statements made by Readers and Contributors on this platform do not necessarily represent the views or policy of Multimedia Group Limited.
Tags:
Afrochella co-founder
Afrochella Festival
Ken Agyapong Jnr
Xclusives