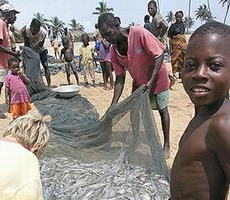 The fishing sector in Ghana has morphed through a series of stages, albeit it has a rather static growth and contribution towards the national purse.

It has been considered at least over the last decade or two as one of the sub-sectors in the agricultural industry that has a potential of creating jobs, helping government raise revenue for development, and most importantly, mitigating poverty  along our coastal communities.

Plans to develop and establish fishing harbours or landing sites along our coastal communities have been unearthed every now and then but see “no concrete” implementation.

One of such plans has necessitated the position of this piece; “conversion of the Fosu Lagoon in Cape coast into a harbour and fish landing site”.It must be acknowledged that such a decision must come against the backdrop of a comprehensive analysis on the environmental viability and economic prosperity that such a project will bring not only to the people of Cape coast, but the country at large.

The Fosu Lagoon of Cape Coast covers a land area of about 100 acres (40 hectares). It has the characteristics of a natural harbour as it is separated from the Atlantic Ocean by a sand bar of about 35 meters. Research has shown that, it is one of the most polluted (by the deposits of metallic, hospital and household solid waste materials from a number of connecting drainage systems) lagoons in the country, despite attempts made to develop the fishing industry.

A critical economic analysis, pinpoints the enormous benefits that will accrue to the country if the right models for developing the Fosu Lagoon and other natural seaside resources are instituted.

A lagoon the size of Fosu, given its location and current economic activity that transpires there, has the potential of being one of the best fishing harbours along the coast of West Africa.

Consequently, institutions such as the World Bank, International Development Association, Global Environment Facility among others over the last five years have committed to supporting the Government of Ghana develop these resources but they are still waiting for responses.

However, given the prospects in the fishing industry, and its inability to currently produce an output to satisfy the demands of the Ghanaian market shouldn’t other development measures be considered? When are we going to make full use of private participation in this sector?

Last year, government allocated a woefully low $36m to all Coastal Fishing Harbours and Landing Sites Redevelopment Project when the Fosu lagoon alone needs $250m, money that is available for government at no initial cost.

When converted into an ultra-modern fishing port, the Fosu lagoon can hold up to about 40 medium-sized 65 meter keel modern fishing vessels and 200 artisanal wooden canoes.

Even though production will not be scaled up in the immediate term, its spare capacity can help ease the congestion on the Tema and Takoradi fishing harbours, as well as meet some of the needs of the ever growing oil and gas industry.

Our goal of self-sufficiency in fish production, decreasing the import bill on fish, will have been achieved and living standards of fishing communities will also have been improved.

Office spaces will be available for registered companies for proper monitoring and fishing activities. Waste management systems could be included in the new model/design to keep the environment safe from any pollution as is currently the case under the unregularised system.

This will subsequently add to the export base of the Ghana economy and also reduce our heavy dependency on imported fish. An amazing 100,000 jobs could be created from this “dead” natural resource.

It is instructive for the purposes of proper economic extrapolations to situate all the above in a numerical context; costs and revenue.

Research has shown that the overall cost to be incurred in the construction of the international standard fishing harbour/landing sites in place of the Fosu Lagoon will be $250 million.

This is made up of $150 million construction cost, and $100 million relocation costs for relocation of the Metropolitan Hospital and the Nurses and midwife Training College, which have been eroded by the sea salt.

Revenue projections are at a whopping $14.4 million per year over the first couple of years. These are extensions drawn on the current pricing/fees charged by the existing fishing harbours. Estimates are that, any initial investments, given a moratorium period of 5 years, can be recouped together with adequate returns over 25years (construction period inclusive), given the cost of capital to be between 3% to 5% which could be sourced abroad.

The decision variables we should not be limited to the herein mentioned. It would include the current investment and returns in the fishing industry as a whole, and juxtaposing that the returns from the “New Fosu Lagoon” and other harbours that will developed assuming the projected cost and revenue structured mentioned above will not significantly change.

At this rate, one can be sure that over the next 5 years, we would have invested over $ 100 million with nothing to show for. A well-targeted investment plan aimed at Fosu Lagoon will obviously involve an initial outlay of $250 million, and given the rate of return, the payback period will be approximately 12 years ipso facto. The project will now be self-sustaining and all benefits after this payback period will be economic profits to government.

What is more, private business persons will have created over 100,000 direct and indirect jobs. If this is expanded to include the over 14 coastal and fishing communities along the stretch of Ghana’s shores, we are sure to be one of the powerhouses below the Sahara in the export of fish and its related product.

In order to put the entire project in a progressive, it will have interim costs as interim redundancy of people who already have jobs in the current ill organized lagoon basin.

They will definitely rant about income losses within the interim, but which is plausible; forfeiting current unstable/irregular/meagre income or futuristic job stability, skill development, environmental protection, enhancement in export value of fish, development of an entire industry, and provision of over 100,000 jobs? . We must go for the latter as executing the project is economically, socially, culturally, and politically better than the current situation of continuous depletion of the lagoon.

It will also be misleading if we do not consider the skill set and technical expertise required in the operations of the proposed field. Training will be required.

But in the face of brain drain of the experts we train at the Regional Maritime University in this country, and with the right human capital planning, this challenge should be surmountable.  For redundant fishermen within the transition period, they will have to be trained with the skills they will require, which will require organizing them into recognizable trade associations and business units formed for them.

Reference seems to have been made to government a lot in this piece which poses a sustainability challenge to a project this calibre. The focus is for government to facilitate the development of the project with ownership of about 20 percent, 20 percent to partners to execute the infrastructural phase of the project, and 60 percent to private sector and individuals.

This balanced stake holding is to guard against the usual lack of commitment from the quarters of government. In any case, government is investing over $20 million, and a redirection these funds are imperative.

In summary, we need to get a head for business and a heart to protect the environment, paying heed to the words of Bertrand Russell, that we develop machines and technology to aid us improve agriculture (Fishing in this case) ensure socio economic development.

IMANI is ready to support the two Ministries of Agriculture and Fisheries to reduce fisher folk poverty in Ghana. We shall be engaging them.