As at 6pm last Wednesday, some Kotoko fans had been awakened to the fact that their team was not done for as touted by some pundits and fans alike.

The reason was simple – an emphatic 2-0 win over an Ashantigold side which had become almost unplayable in recent games against the Porcupine Warriors.

The swagger was coming, at least for David Duncan who has been working tirelessly to return the team to winning ways. The felling of the ‘Aboakese’ was apt for the task ahead.

The crowd was nowhere near the biggest attendance recorded this season. But there was a breeze of confidence in their approach.

You could read the optimism on their faces. One fan told me: “εnnε, yεbε hyε!”. Today, we will win.

The message was clear. Nothing short of a win would be accepted.

Bechem United came into the game chasing their second ever win over Asante Kotoko in what was their sixth league meeting.

Things were not so bright for them regarding their performance on the road. They'd picked a first away point against Lions.

Their top scorer, Noah Martey had returned to the squad but had trained little with the team. They were however not short of firepower as Kofi Bekoe, who has returned after sojourning in Egypt was leading the lines, with assistance from former Kotoko midfielder Aminu Mohammed.

Kotoko were unchanged as David Duncan stuck with his winning team against Ashgold. Things were kept simple. The spirit of the old football maxim of not changing the winning team was respected by the gaffer with youngster Dauda Mohammed and Ahmed Toure leading the lines. 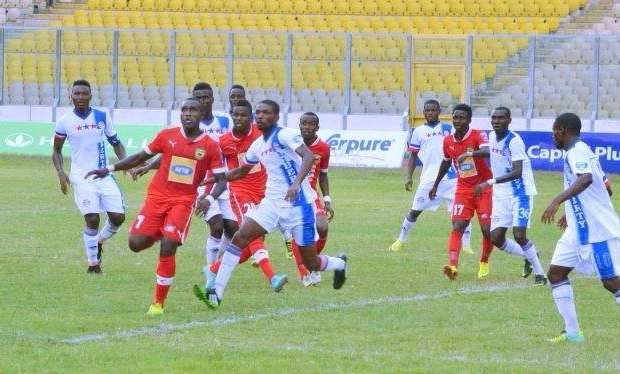 Kotoko started brightly with excellent passing while Bechem struggled to keep up.

Bechem nearly paid for the slow start in the fourth minute when Eric Donkor ghosted past Patrick Cole to set up Toure, who was 12 yards away from goal. The Ivorian conspired to miss that chance on a platter.

That woke Bechem up. Kofi Bekoe took the initiative as he dropped deep to start things and bring a kick into his team. Together with Aminu Mohammed, the two began to match the Kotoko midfield base of Jackson Owusu and Jordan Opoku. But Kotoko edged them in possession and control.

16 minutes in, Kotoko's exciting Dauda Mohammed was fouled. Toure stepped up from 35 yards.

He sent a piledriver in but it was repelled by the Bechem defence only to find Atta Kusi who was waiting on the right wing. Kusi took all the time in the world and with a tailor measured pass, he found the head of the high-jumping Dauda who nodded past Rashid Seidu. The keeper was beaten, the fans had what they wanted and the stadium erupted.

But then, things soon slowed down and Kotoko appeared tired. Bechem grew in presence with Kofi Bekoe all over the field. His mates Aminu Mohammed and Yaw Mensah took the midfield but Kotoko survived until the halftime whistle from referee A.D Mohammed.

The lads from Bechem came out bullish from the halftime break. Team coaches Seth Osei and Malik Jabir had done or said something right. They bossed every department while Kotoko looked sluggish.

The killer instinct with which the Reds began the game was missing.

Then came the game changing moment as Kofi Bekoe took the ball 10 yards shy of the halfway line – in his own half. He danced round two Kotoko players, sliced the ball through the  Kotoko defence which was playing a very high line.

Aminu Mohammed answered the call, took the ball and made way for the Kotoko goal. Abeiku Ainooson was first to recover, making his way to the ‘crime scene’ and with a game saving tackle plucked the ball from the right foot of the running Aminu. Kotoko’s blushes had been saved but the hero stayed down and had to be subbed. He was replaced by Stephen Oduro.

Eric Donkor slipped into the left-back role, Amos Frimpong into central defence alongside Ahmed Adams and Oduro joined Jordan and Jackson in the middle. The first move by Bechem into Kotoko’s half after the change showed the frailty of the new backline. The opponent now could smell blood. Wave after wave they came and the cracks grew wider with defence taking forever to settle.

A harmless-looking throw in from the left hand side of Kotoko’s defence for Bechem split the defence into fragments.

The barrier had been vreached but goalkeeper Ofori Antwi made a brilliant point-blank save. Nobody arrived to clear the lines and Aminu Mohammed under no pressure slammed the ball into the back of the net. Job done! 1-1, with 63 minutes on the clock.

Kotoko were now living dangerously as Bechem kept pounding them with more attacks but Kofi Bekoe, Francis Dadzie and Hamza Mohammed fluffed their lines. Another game changing moment arrived with under five minutes to go.

Rashid Seidu made a save and was about to restart play. Ahmed Toure sensed the goalkeeper’s imminent error and charged towards, stealing the ball with his right foot as the goalie bounced the ball off the turf, he set off to round Seidu up but the shocked goalie impeded him from behind, Toure tumbled.

“PENALTYYYYYYYY!”, came the shouts as the referee wasted no time in pointing to the spot.

Toure stepped up and sent Seidu the wrong way to put Kotoko the ‘right’ way as his penalty kick nestled into the bottom left corner of the goal post. The lead had been restored but the win was not yet secured.

Kotoko’s journey to redemption would keep going with a much relieving win thanks to the brave and intelligent Toure with his tenth goal of the campaign.