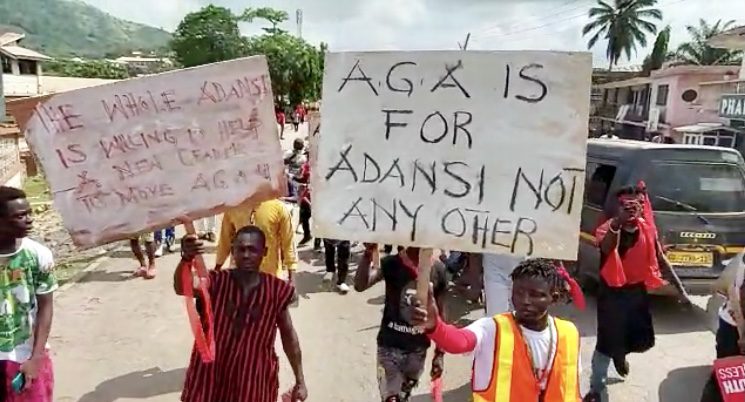 Some irate youth in the Obuasi Municipality have staged a demonstration over what they describe as devastating unemployment among the youth in the mining community.

The protestors want the management of Anglogold Ashanti to absorb them into the mining company.

They also called on the government to invest in the development of the mining community.

The angry youth, clad in red, thronged the principal streets of Obuasi to register their discontentment over the ailing state of the mining community.

The protesters wielded placards bearing inscriptions such as “Fix The Country Now!”, “The Youth are jobless”, “No Small-scale mining, No AGA” and “Stop The Corruption” to drum home their demands.

They particularly demanded their employment into the mining company as promised by President Akufo-Addo.

One of the aggrieved protestors said “Obuasi is one of the major contributors to our economy. Ghana is considered a wealthy community so a mining community like Obuasi should have better roads and good layout settlement. But this place isn’t like that. The youth here are unemployed, the roads are bad, and they have bad layouts”.

Another added: “President Akufo-Addo assured us he will provide us with jobs when he voted into power. How do you expect us to fend for ourselves? We are suffering!”.

The protestors, however, did not serve any petition to authorities, insisting their demonstration is enough notice.

The irate youth invoked curses on the ruling New Patriotic Party government, the opposition National Democratic Congress, and the management of Anglogold Ashanti.