It's my turn to be president - Ricketts-Hagan declares, eyes Macron feat - MyJoyOnline.com 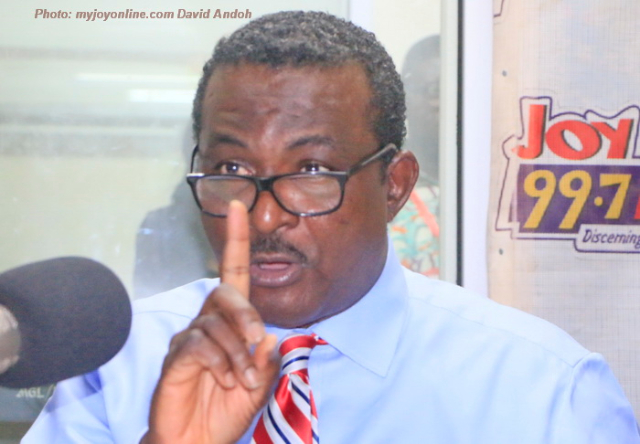 Former Deputy Finance Minister, George Kweku Ricketts-Hagan, has declared his intentions to be president in 2020 starting with a contest in the National Democratic Congress (NDC) presidential primaries.

In a three-page letter to Parliament, the former Mahama appointee said the party needs "fresh legs" following his former boss' abysmal performance in the 2016 elections where he polled the lowest percentage of votes ever for a sitting president.

Some pro-Mahama forces say the immediate former president who left office after only one-term, has unfinished business and needs another shot at the presidency.

But the former Central Regional Minister says suggestions that President Mahama has "unfinished business" is alien to politics.

"There is nothing like 'unfinished business' by any one individual in governing a democratic nation, in fact, there is nothing to finish, if you believe in democracy," he maintained.

The former Minister's ambition will be seen as a long shot as it is likely to be branded as an also-run in a race which many in the NDC expect John Mahama to win.

Ricketts-Hagan, an investment banker, believes a fight to lead the NDC is a risk he is prepared to take. He drew comparisons to political feats from underdogs like former American President, Barack Obama; former French president Francois Hollande and the latest sensational winner President Emmanuel Macron of France.

An Open Letter to my Colleagues –The Minority NDC in Parliament

It is with utmost humility that I write this letter to you, which I believe will one day become historic.

A little over a year ago, we lost an election that many of us thought we were going to win, yet we lost abysmally by over one million votes. Ghanaians wanted a change from the National Democratic Congress (NDC) and from the Mahama administration –that some of us were proud to have been given the opportunity to be part of in serving our country.

I love and respect President Mahama and I would forever be grateful to him for the opportunity he gave me to serve in his government, first as a Deputy Minister for Finance and then Deputy Minister for Trade and Industry, and finally as the Central Regional Minister. These roles that I played in those key Ministries of our economy, have equipped me with the requisite knowledge and comprehensive overview of the dynamics in our economy and how we can make it work better than it is at the moment.

The Regional Ministerial experience has deepened my understanding of our local government system through coordinating and directing administrative machinery of the Metropolitan, Municipal and District Assemblies (MMDAs).

President Mahama was our president and the leader of our dear NDC party. He served his party and country well to the best of his ability, with the best of intentions. I have no doubt in my mind that posterity will judge him kindly. He had the opportunity to make a recogniseable contribution to his party and to the development of his country, as its leader, and surely he did the best he could and deserves to be commended for his efforts but no one person can solve the generational problems of our dear country.

All past presidents contributed their quota to the development of their country with the opportunity given them, and left the scene either by constitutional constraints imposed on them or circumstances that befell them. There is nothing like “unfinished business” by any one individual in governing a democratic nation, infact, there is nothing to finish, if you believe in democracy. Governance of a country is a continuous process carried out by leaders who emerge in each generation to serve their people.

There is “a time to come and a time to go”, usually determined by the people in one way or another. There are important roles for our past presidents to play in a fledgling democracy such as ours, by using their rich experience and knowledge to support the new generation of leadership in their efforts to develop their country and improve the economic welfare of their people. We are lucky to have three (3) living former Presidents; Presidents Rawlings, Kufuor and now Mahama and the country should benefit from their statesmanship.

As we are presented with a new opportunity to look into strengthening and reinvigorating the future of our dear party, anchored on our principles and values; of accountability, probity, social justice and transparency, we should all appeal to our own conscience and not our sentiments to do the right thing that will invariably give us a realistic chance of wrestling back power from the NPP.

Indeed, it is for this reason that many of us have silently and thoughtfully come to the realisation that the time has come for the baton of leadership to change hands, so that as a party we can continue our relay race into the future with fresh legs.  We need to have a new vision, a new start and a change in direction, in a way that is reflective of the modern aspirations of our people.

These we must do dispassionately and not nostalgically, and no one with good intentions for our NDC party should be afraid of positive change as long as they are in the party to do good by serving the people and not themselves. We must “clean up” and restore the battered image and dignity of our party and rid it of those who are just in for the largesse. Our people “the silent majority”are calling for it and we will not be forgiven if we don’t heed to their call. We cannot brush things under the carpet and preside over a turmoil.

Honourable, I have taken almost one year, since we lost the elections to do some retrospection of what has gone wrong with our dear party and the possibilities for the future, and how we can reset and reposition our party strongly and strategically to stand a chance of winning power again. I have also done my own introspection and soul searching, and my readiness to lead our great party.

And I can confidently say to you that I am ready to lead our great party to victory, if I am given the opportunity. I still believe that the NDC Party in government is still absolutely crucial to Ghana’s inclusive development and its better future. If we in the NDC are honest to ourselves and live up to our true values and principles, devoid of corruption and promote policies and programmes that come natural to us, as a “Social Democratic Party that believes in equality and egalitarian treatment of all persons with respect to social, cultural, educational, political, religious and economic relations in a multi-party environment” as enshrined in the NDC constitution, we will continue to be extremely relevant to Ghanaians for many years to come.

Because we are naturally the only political party in Ghana who can genuinely develop the resources nature has endowed us with sustainably and make use of the full mobilization of talents and energies of all our people to get the extreme poor out of poverty, improve the economic lives of all our people, and hold a better prospect for their future- be it health, education, infrastructure or jobs.

As I embark on this journey with all its challenges and possible fatalities, I would also like to draw your attention to the exciting possibilities. It may interest you to know that about 9 years ago, a certain one-term Senator from Illinois called Barack Hussein Obama announced his candidature to lead the US Democratic Party in opposition to regain power in America. Not many people gave him audience, especially his own Democratic party. They thought he did not stand a chance of winning the Democratic party’s primaries against well established and well-marketed names like Hillary Clinton, Joe Biden and other heavyweights of the Democratic Party. The rest they say is history.

Again in Europe, history repeated itself- less than two (2) years ago, a little known Emmanuel Macron, a Minister for Economy and Finance of France under President Hollande, had the “audacity” to set up his own political party En Marche!, quit from the Hollande government and announced he was running for the presidency of France – the world’s 5th largest economy. Not only was he unknown but the establishment of his Socialist Party and most of France thought he was insane. Nobody thought Macron could be marketed in less than twelve (12) months to an election. Again, they say the rest is history.

My dear honorable friend, by this letter, I am announcing my intention to become a candidate in the flagbearership race of the NDC Party in 2018, when nominations open. Over the next weeks and months, before nominations are open, I will consult and share with you my vision and perspective on how we can recapitalize our fortunes for 2020.

I believe that with my new vision, and the policies and programmes that will be fashioned around it, based on our philosophy as a Social Democratic Party will earn me your support, to enable me to take my case to our NDC members across the length and the breadth of our country. When we are successful, with God on our side, I hope to lead and return the NDC party back to power in 2020 and stay in power in 2024! KWEKU BEYE!

Please remember me in your prayers, for the task ahead is not for the faint-hearted.  Have a Merry Christmas and a Happy New Year!

God bless you and God bless our great NDC party!