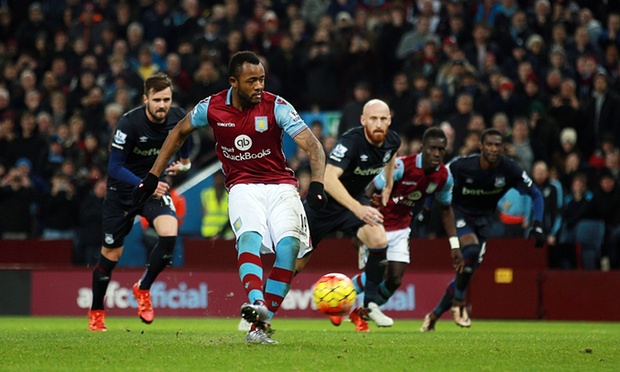 Jordan Ayew rescued a point from the penalty spot to hand Premier League strugglers Aston Villa a share of the spoils at home to West Ham.

Another defeat looked on the cards for the home side when defender Aaron Cresswell lashed home a left-footed effort in first-half injury time.

But Mike Dean controversially awarded Villa a penalty with just over an hour gone and Ayew, who has been a rare shining light for Villa, levelled. It is the Ghanaian's fifth goal of the season, one shy of the six of his elder brother, Andre.

Both sides struggled to really create some momentum in the closing stages and the only real chance fell to Villa right-back Alan Hutton, whose effort was cleared by Hammers defender James Collins.

If Newcastle avoid defeat at home to Everton in the evening kickoff, Villa will remain 10 points from safety at the bottom, while West Ham, who have drawn five in a row and only scored two in that time, have fallen a place to ninth.