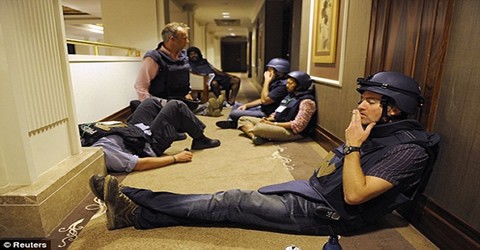 A group of journalists are under siege at a five-star hotel in Tripoli where they are being held hostage by soldiers loyal to Libyan leader Muammar Gaddafi.

Mortar, rocket-propelled grenade attacks and gunfire have been reported in the grounds of the £500-a-night Rixos hotel, where the 35 foreigners have been held for five days.

The hostages are unable to leave the hotel compound and armed guards are patrolling the corridors with AK47s.

There are believed to be a dozen British journalists being held and several Americans, including former U.S. congressman Walter Fauntroy, 78. An Indian parliamentarian is also among the hostages.

The captors have vowed to defend their country against the rebels and snipers have also taken up position on the roof.

Despite the luxurious surroundings, parts of the hotel have no power and there is no running water. Food supplies and bottled water are also running low.

With rebels approaching the hotel, Tadek Markowski, a producer with Fox News, said: ‘I think the end is very close in terms of what has been happening at this hotel.

‘We would love it to end in a whimper and not a bang. Our hope is that they basically put down their weapons when the rebels come this way and hopefully there can be a peaceful resolution.’

Trapped BBC reporter Matthew Price described the events as ‘the siege of the Rixos.’

He told Radio 4’s Today programme: ‘It’s a desperate situation. It deteriorated massively overnight when it became clear we were unable to leave the hotel of our own free will.

‘It’s desperately hard to see how we get out at this stage. It’s getting pretty miserable here and you can only imagine the sort of tension which the journalists find themselves feeling at the moment.’

An ITN cameraman trying to leave the hotel yesterday was threatened with an AK-47 by a screaming guard, although the situation was resolved ‘amicably’.

CNN reporter Matthew Chance wrote on Twitter: ‘Everyone frightened & concerned – doesn’t feel like a 5 star hotel. Some water left but food at risk of ruin.

‘We’d like to leave to a safer location and negotiate an exit, but we are being prevented from doing so.

‘Hoping this nightmare will end in a fizzle —not a bang.’

AP reporter Dario Lopez-Mills has described the hotel as a ‘£500-a night prison, with a spa but no power or air-conditioning, with candlelight but no romance.

‘The smell of gunpowder hangs in the thick heat, along with sweat and a little fear.’

He revealed the group is taking refuge in the hotel’s basement conference rooms as the shooting becomes intense.

Crisis talks were taking place at the Foreign Office this morning and the National Security Council was meeting in London.