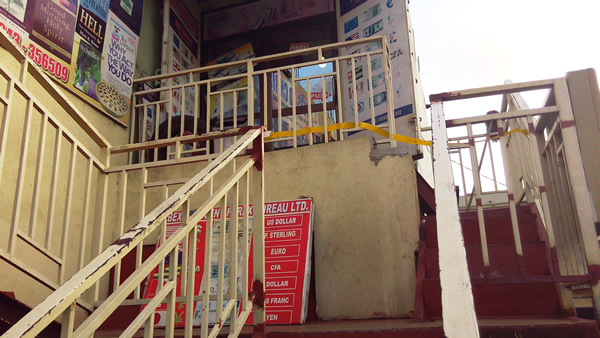 Two people who allegedly robbed a forex bureau at Kaneshie in Accra at gun point have been remanded into lawful custody by an Accra Circuit Court.

Yakubu Alhassan and Haruna Abdulai aka Borbor have pleaded not guilty to conspiracy to commit crime and robbery.

An accomplice, known as Issah, is said to be on the run.

The Court presided over by Mr Aboagye Tandoh turned down a bail application put in by Mr C.K Hoeyi on behalf of Alhassan.

They are to reappear on April 13.

Mr Tuaruka said Alhassan is a welder residing at Agbogbloshie while Abdulai is unemployed and resides at Ashiaman.

On March 23, this year at about 1430hrs, Alhassan and Abdulai and two others now at large, went to the Forex Bureau under the pretext of conducting business and pulled locally manufactured pistols on complainant and two others.

According to prosecution the accused persons and their accomplices took the complainant and his two workers hostage and robbed them of both local and foreign currencies totalling GH¢150,000.

After robbing them, prosecution said one of the Forex Bureau staff raised an alarm and with the support from a Police Patrol Team from Kaneshie, Alhassan and Abdulai were apprehended while two of their accomplices escaped.

Mr Tuaruka said due to the severe injuries sustained by Abdulai as a result of the mob attack he has not been able to give statement.

However Alhassan has admitted the offence in his caution statement and mentioned Abdulai and one Issah, who resides at James Town and another who he did not know his name, as accomplices.

Prosecution said GH¢58,000 have been retrieved from Alhassan and Abdulai as well as two locally manufactured pistols.